Soldiers Kidnap At least 20 Palestinians In The West Bank 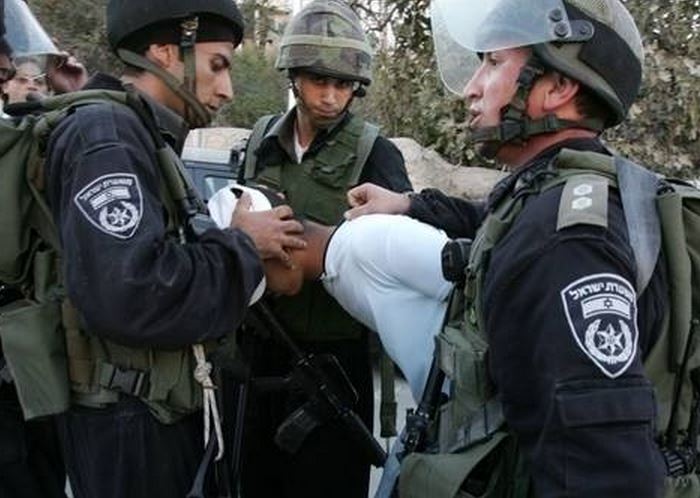 Israeli soldiers kidnapped during late-night hours, and on Monday at dawn, at least twenty Palestinians in different parts of the occupied West Bank, and took them to a number of interrogation and detention centers. Soldiers to demolish seven structures near Hebron.The Palestinian Prisoners Society (PPS) said the soldiers invaded ‘Abwein village, north of the central West Bank city of Ramallah, kidnapped thirteen Palestinians and handed fourteen others military orders for interrogation.

The PPS said that some of the kidnapped Palestinians in the village have been identified as Ayham ar-Refa’ey, ‘Emad Hasan, Mohammad Harb, Mohammad Treib, ‘Ali Najeh, and two brothers identified as ‘Ali and Saed Hijja.

The soldiers also invaded the home of Mustafa Mohammad Hussein, and ransacked it; Hussein’s son was recently kidnapped by the army and is still held under interrogation.

In the northern West Bank city of Jenin, soldiers invaded the Kharrouba neighborhood, and kidnapped a university student identified as Ashraf Hilal Shatta, 21, after violently searching his home.

In addition, dozens of military vehicles invaded a number of neighborhoods in the southern West Bank city of Hebron, and installed roadblocks on the entrances of Ethna, Sa’ir and Halhoul towns, north of the city, stopped and searched dozens of cars, and examined the ID cards the passengers.

Two more Palestinians, identified as Eyad Mohammad Neiroukh, 24, and Mahmoud ‘Ez ar-Rajabi, 23, from Hebron have been kidnapped, in Hebron.

Furthermore, resident Tha’er al-Qmeiri, 23, from Hebron, several various cuts and bruises after the Israeli police chased him while working in Rahat city. He was moved to the Yatta Governmental Hospital, south of Hebron.

The soldiers also kidnapped a Palestinian woman near the Al-Aqsa Mosque, in Jerusalem. http://www.imemc.org/article/71067