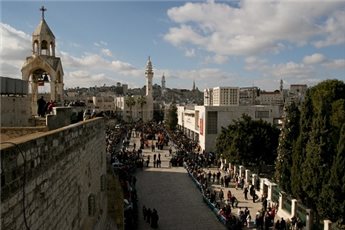 Through the blurring of territorial lines between Israel and Palestine, the Israeli Ministry of Tourism has both claimed and profited from Palestinian sites, the PLO Negotiations Affairs Department said, in a report released this week.’Israeli measures and policies rise to an effective and de facto annexation of the tourism sector, while using tourism as a means to spread its own narrative and spew its propaganda,’ the report stated, according to Ma’an.

In the report, the PLO criticized Israeli Ministry of Tourism maps that erase Palestinian presence by using ‘Judea and Samaria,’ hindering the ability for tourists to know whether or not they are viewing sites within the occupied West Bank and East Jerusalem.

Many tourists and religious pilgrims spend time within occupied Palestinian territory, however, leave under the impression their entire itinerary was based in Israel.

The Israeli Ministry of Tourism has in the past printed material designating Bethlehem as an Israeli destination. Brochures targeting Christian pilgrims marketed several Christian sites including the Church of Nativity in Bethlehem as Israeli sites.

In response to this, PLO Negotiations Affairs Department argued that such scenarios violate UN Security Council and General Assembly resolutions 181, 242, and 338, by both excluding Palestinians from tourism revenue while denying the link of Palestinian Christians ownership to an integral part of their history and identity.

‘Israel’s occupation has turned a potential source of income and shared opportunity into a story of theft and lost potential,’ the report stated.

‘The company is illegally exploiting Palestinian natural resources including salts and minerals for its own economic benefit with the full
backing of Israel’s government,’ the report further stated.

Trails and walking tours were additionally criticized as an Israeli method of using tourism to create ‘facts on the ground.’ Trails marked by Israeli authorities often skirt Palestinian areas, especially the ‘Jerusalem Trail’ which is diverted around Palestinian neighborhoods when possible so as to prevent any encounters with Palestinians.

‘The path is intended to create the sense that Jerusalem is an Israeli-Jewish city with sovereign and legal contiguity while, in reality, almost half the track is in occupied East Jerusalem.’

The report highlighted the PLO’s continuing efforts to work with international bodies in order to counter Israeli exploitation on Palestinian land and resources.