Father, His Child, And A Third Palestinian Receive Interrogation Orders In Bethlehem 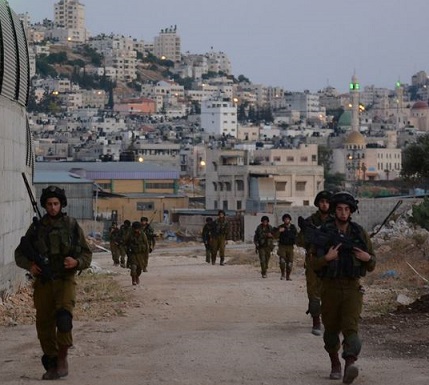 Israeli soldiers invaded, on Monday at dawn, the town of Beit Fajjar, south of Bethlehem, and handed a father, his 12-year-old child, and a third Palestinian, military warrants for interrogation. Army also invaded Surif, near Hebron, and searched homes.Eyewitnesses in Beit Fajjar said the soldiers invaded the town before storming the home of Mohammad Ismael Za’oul, and violently searched it.

The soldiers handed him and his 12-year-old son, Ezzeddin, military warrants ordering them to head to the Etzion security base, south of Bethlehem, for interrogation.

A third Palestinian, identified as Ahmad Kamel Thawabta, 26, received a similar order after the soldiers stormed and searched his home.

The army withdrew from the town after handing the military orders; no clashes or injuries were reported.

In addition, soldiers invaded Surif town, northwest of Hebron city in the southern part of the West Bank, stormed and violently searched several homes, belonging to members of the al-Hour and Ghneimat families.

Soldiers also installed roadblocks on the northern entrance of Hebron city, and Farsh al-Hawa area, south of the city, in addition to the main road of Sa’ir town, before stopping and searching dozens of cars, and interrogated several Palestinians while inspecting their ID cards.