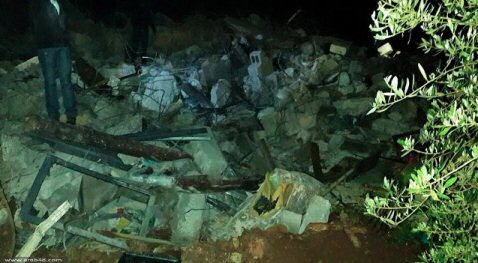 Clashes broke out early Monday morning, between Israeli police forces and residents of Kufr Kanna, where Israel demolished the home of Tariq Khatib. A general strike has been declared for Monday in the Palestinian town, located in the Galilee area of northern Israel.Many of the town’s 20,000 residents wanted to block the home demolition with their bodies, but large numbers of Israeli police prevented them from approaching the home as it was demolished. The forces shot rubber-coated steel bullets, tear gas and stun grenades at the residents, who are citizens of Israel. Several people were reported to have sustained light injuries during the clashes.

Tariq Khatib, owner of the home that was demolished, told the Arabs48 news portal that “I inherited this land from my father and my grandparents. I’ll rebuild my home a hundred times, a thousand times, and will not succomb to Israeli government racism”.

In a statement issued by a youth group in Kufr Kanna, it was stated that “we consider this a brutal assault not only against Tariq Khatib and his family, but against all the people in our beloved Kufr Kanna.

Knesset Member Basel Ghattas (National Democratic Assembly) stated that Israeli forces “committed one of the most heinous crimes possible, namely the demolition of a home, which is supposed to be the security and shelter of a family, and especially for children”. Ghattas added that Israel’s “colonial policy of demolishing Arab-owned homes is an attempt to besiege our presence in our land. We are the indigenous owners of the country”.