Army Carries Out A Limited Invasion Into Southern Gaza 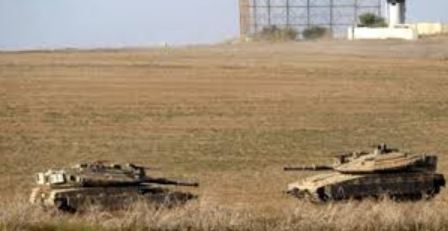 A number of Israeli military vehicles carried out, on Wednesday morning, a limited invasion into areas east of Rafah and Khan Younis, in the southern part of the Gaza Strip.Media sources in Gaza said several armored vehicles, and four military bulldozers, invaded the an-Nahda neighborhood, east of Rafah, and moved towards the northern part of the district before bulldozing lands in the Sharab al-‘Asal area, east of the al-Fakhary area, east of Khan Younis.

The soldiers also opened fire on Palestinian agricultural lands near Abu Reeda area, southeast of Khuza’a area, east of Khan Younis; no injuries were reported, but the farmers had to leave their lands seeking shelter, and fearing additional Israeli violations, and escalation.

It is worth mentioning that Israeli fighter jets also flew over different areas of the coastal region, repeatedly breaking the sound barrier, and causing panic among the residents, especially the children.