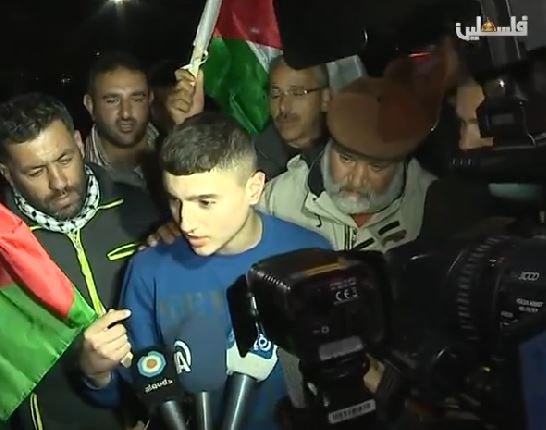 The Israeli Authorities released on Thursday at night child detainee, Khaled Sheikh, 14, from Beit ‘Anan in occupied Jerusalem, while his family and scores of residents waited, and welcomed him. Israeli soldiers earlier stormed the Betunia nearby town, and kidnapped two children.The released child, who suffers from anemia and other health issues, said that he did not receive any medications related to his illness, and that the only meds he received were painkilling pills.

“They give the ailing detainees those pills to silence them, and reduce the symptoms instead of providing us with the medical treatment we urgently need,” he said.

The child’ mother told Palestine TV that she is very happy for his release after the four months he spent in ‘Ofer Israeli prison, facing constant violations and difficult living conditions.

“Am so happy he will fill our house with his presence and pleasant spirit” the mother said, “My wish is for all detained children, and every imprisoned Palestinian, to be released and return to their families.

His family was never allowed to visit him, and were granted a permit dated after his scheduled release.

Earlier on Thursday afternoon, Israeli soldiers kidnapped two Palestinian children near their homes in Beit ‘Anan, without any legal justification, especially since there were no clashes or confrontations in the area

The abduction of the two children was captured on video by the Palestine TV crew; they have been identified as Raed Ghazzawi, 13 years of age, and Bara’ al-Akhras, 15.

They were both near their families’ homes in Betunia when the soldiers kidnapped them, and took them two kidnapped children to the ‘Ofer Israeli prison.

— Video by Ali Dar Ali of Palestine TV, documenting the release of Sheikh, and the abduction of the two children in Betunia. https://www.facebook.com/ali.darali.5/videos/vb.1000029…eater