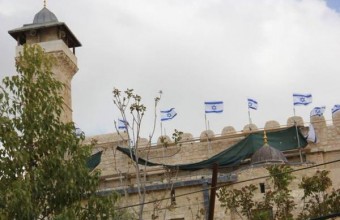 Extremist Israeli settlers raised the Israeli flag on the walls and over the rooftop of al-Ibrahimi Mosque, also known as the Cave of the Patriarchs, today in Hebron.The reconstruction committee in Hebron condemned, in a press statement, this measure and considered it a continuation of ongoing Israeli attempts to alter the character of the mosque and annex it to the list of Jewish heritage sites.

According to the PNN, the committee slammed this Israeli measure as a provocative act and an assault against Muslims in general and Palestinians in particular.

It called on all relevant human rights and humanitarian organizations to take the necessary actions to protect the mosque.

Baruch Goldstein, an extremist settler from the illegal settlement of ‘Kiryat Arba’ settlement, who holds US and Israeli citizenship, opened machine-gun fire at Muslim worshippers during prayer. He killed 29 people and injured 135. On the same day outside the Mosque, the Israeli army opened fire towards fearful and panicky worshippers and killed at least ten civilians.

Following the incident, al-Ibrahimi Mosque was converted into a military post and later divided into two parts, one for Muslims and another for Jews. Thus the Mosque became a point of conflict and constant tension that has marred its sanctity.

Nowadays, Israel controls Palestinians’ access to the Mosque, prevents many from praying there on a regular basis and frequently bans the call for prayer under the pretext of disturbing the settlers.

The control is not only restricted to prayer at the Mosque, but also calls for prayers through speakers. In January 2015 alone, the call for prayer was banned 51 times.

The Hebron Awqaf Directorate said that the policy of banning Muslims’ call for prayer is aimed at tightening the noose on Palestinians and stopping them from praying in the Mosque, subsequently driven them away from their city.