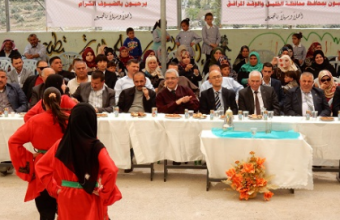 On Monday April 20th, 2015, Mr. Junya Matsuura, Ambassador for the Palestinian Affairs and the Representative of Japan to the Palestinian Authority, attended the opening ceremonies for two schools projects. The first was held at Shawawreh Village, in Bethlehem, and the other was at Beit Ula Village, in Hebron. The ceremonies were also attended by some representatives of both communities and the governors as well, according to the Palestiian News Network (PNN).

These two projects were funded by the Government of Japan through Japan’s Grant Assistance for Grassroots Human Security Projects (GGP). With a grant of USD 121,605, Shawawreh Village Council constructed 6 classrooms on a second floor at Al Halabi mixed school to accommodate around 140 students who used to study in inappropriate rented rooms outside the school building.

This project would provide the students with better learning environment and comfortable spaces to let them enjoy their educational path. Whereas Beit Ula Municipality in Hebron utilized their grant of USD 120,741 to build 9 classrooms at UNRWA Girls School in Beit Ula in order to mitigate the high density of the classrooms and improve the educational condition for 400 students. It’s worth to mention that Beit Ula Municipality contributed to this project with more than USD 60,000 from their own resources.

Mr. Matsuura in his speech emphasized Japan’s firm commitment of supporting Palestinian people from human security perspective as well as the importance of implementing social and economic development projects needed for Palestinian communities.

Since 1993 the Government of Japan has extended its official development assistance amounting approximately $1.6 billion to the Palestinians. GGP projects have been formulated in collaboration with the Palestinian Authority through MoPAD since 2010.