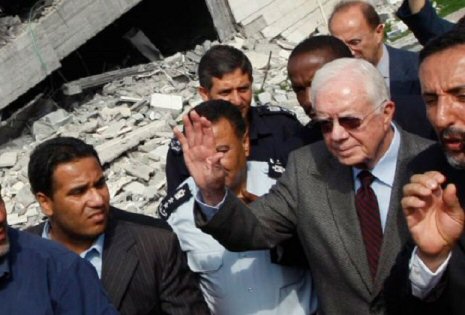 After Israeli occupation obstacles, the Palestinian Authority (PA) sought to impede former US President Jimmy Carter’s planned visit to Gaza Strip.Carter has called off the planned visit to the region, scheduled to take place on Thursday, Days of Palestine reports.

He had planned to make the visit in an attempt to draw attention to the deteriorated humanitarian situation in the war-battered territory.

The trip included planned meetings with officials of the Palestinian Islamic Movement Hamas, which is still currently ruling the Gaza Strip.

As an attempt to spoil the visit, none of the Israeli officials have agreed to meet with the former US president, yet accepted a visit via Eretz Crossing.

Regarding the PA’s role in the cancellation of Carter’s visit, a well-informed PA official said that close aides of Mahmoud Abbas put pressure on certain official close to Carter to cancel the visit.

Sources said that Carter had met Saudi officials and has been working on a new reconciliation known as Mecca II.

Abbas’ aide said that the defacto Palestinian President and other senior PA officials fear an Arabic pressure being put on Abbas to oblige him in committing to a potential reconciliation agreement with Hamas. This would show that Abbas is the side who is hindering the reconciliation, the official said.

It is worth mentioning that Fateh (PA backbone) official Abdullah Abdullah had announced the cancelation of Carter’s visit 36 hours before the official announcement by Carter’s staff.

See also: Palestine and the Injustice of the World Community by Robert Fantina.