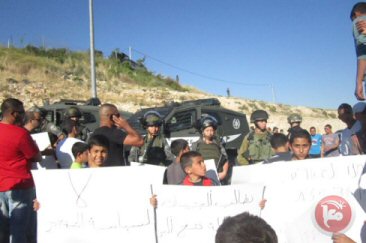 Israeli forces have sealed the main entrance to the East Jerusalem neighborhood of al-Zaayyem, ‘locking up more than 6,000 Palestinians in a large prison,’ local residents say.An iron gate set up by Israeli forces has been completely closed for ten days, head of al-Zaayyem local council Naim Sub Labantold Ma’an News Agency, on Monday.

Israeli forces first set up the gate near a military checkpoint at the main entrance to al-Zaayyem in late March, citing security concerns.

The soldiers have controlled the gate since then, Sub Laban said, opening and closing it whenever they want to restrict the movement of schoolchildren, businessmen and others who need to go in and out every day.

Sub Laban added that Israeli forces had opened the gate for several hours on Sunday afternoon, and again for two hours on Monday morning, but that otherwise the gate had been closed for ten days.

When the gate is closed, residents of the neighborhood, who have described the closure as ‘collective punishment’ are forced to use an alternative route of dirt roads about five kilometers long.

When the gate was first set up, Israeli authorities claimed it would remain open all the time ‘except when there is a dangerous security situation,’ Sub Laban said.

Abu Mahmoud Shweiki, an ice cream distributor who sells to stores in al-Zaayyem, said that he now has to drive his truck over a long dirt road every day in order to load and unload his goods.

Schoolchildren also said that they have been forced to walk a long route along dirt roads in order to reach their schools every day.