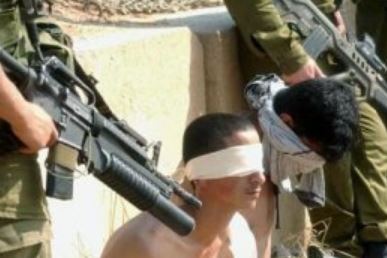 The Palestinian Prisoners Society (PPS) has reported Monday that a recently detained Palestinian child has been subject to torture, and frequent violations, by Israeli soldiers and interrogators, in a military base, before being moved to the al-Maskobiyya interrogation facility, in occupied Jerusalem.The PPS said that child was beaten with weapons and batons, while the soldiers also repeatedly kicked him, causing various cuts and bruises to his head, and other parts of his body.

The child, Malek Emad Zayed, from Ramallah, told a PPS lawyer that he was bleeding from his head, after the soldiers repeatedly kicked and beat him, and that he was not allowed to have any food, or even water.

The child was later moved to the al-Maskobiyya interrogation facility, where the PPS lawyer eventually managed to meet him.

The PPS said the army decided to keep the child under interrogation until May 15, for what the interrogators said, “Obtaining a secret file against him.”

Such “secret files,’ largely used to keep Palestinians held for extended periods without charges or trial, include alleged violations and charges that neither the detainees, nor their lawyers, can ever have access to.

They are mainly used to keep Palestinian detainees held under arbitrary “Administrative Detention” orders, without charges. Many detainees spent years in prison as such ordered kept getting renewed by military judges.