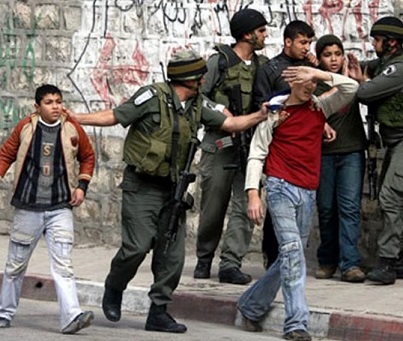 Israeli soldiers kidnapped, on Tuesday at dawn, eleven Palestinians, including two children, after breaking into their homes, and searching them, in different parts of the occupied West Bank.Media sources in the northern West Bank district of Jenin said dozens of soldiers invaded the towns of Ya’bad and Jaba’, south of Jenin city, and kidnapped two Palestinians.

Eyewitnesses said the soldiers searched and ransacked several homes in the town, including the homes of the kidnapped Palestinians, in addition to the homes of Emad Abu ‘Oun, Mohammad As’ad Ghannam, and Emad Amin Kanaan.

They also broke into the home of Abdul-Hafith al-Hashlamoun, and handed his son, Eyad, a military order for interrogation. Eyad is a local journalist.

Another Palestinian, identified as Mohammad Ismael Mousa, 17 years of age, was kidnapped from his family home in Abu Soud Mountain area, west of Beit Fajjar.
It is worth mentioning that the soldiers have kidnapped nine children in al-Khader in nearly one week.

In Jerusalem, soldiers invaded a home and handed a child, identified as Samer Khaled, 13 years of age, a military order for interrogation in the al-Maskobiyya interrogation center, west of Jerusalem.