Detainee Adnan Is Only Consuming Water And Salt 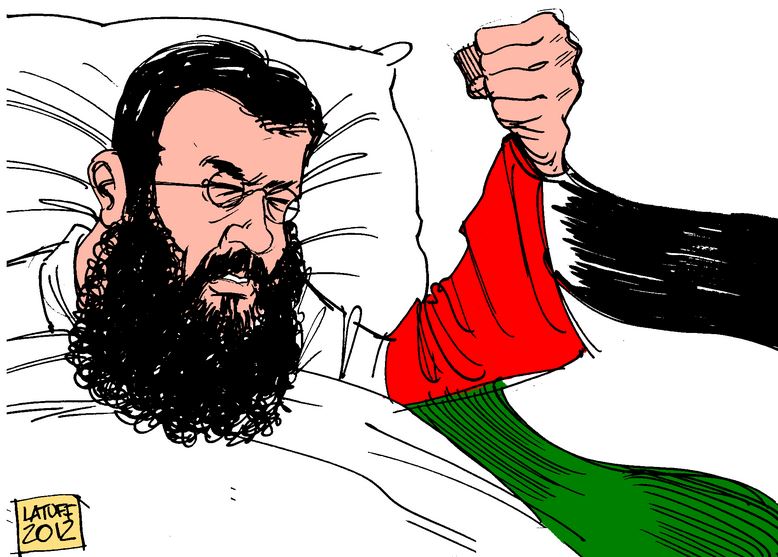 Hunger-striking detainee Khader Adnan, who started his strike nearly three weeks ago, is currently only consuming salt and water, rejecting medical checkups and any sort of supplements. Lawyer Ashraf al-Khatib of the Palestinian Detainees Committee said Adnan is determined to continue his strike until the Israeli authorities end his arbitrary Administrative Detention, without charges or trial.

Al-Khatib managed to visit Khader in the solitary confinement section of the Hadarim Israeli prison, and that the detainee informed him he is not accepting medical checkups, medications or ant sort of supplements.

He added that Khader in determined to continue his legal battle against his illegal imprisonment, especially since Israeli uses Administrative Detention policies to keep hundreds of detainees imprisoned without charges for extended and repeatedly renewed periods of time.

Khader also informed the Prison Authority that he would not attend any session of Administrative Detention courts, as they have no legitimacy and are only setup for show.

The Prison Administration threatened to take him to court by force, while the detainee is also rejecting to be represented by any lawyer in absentia, adding that the Red Cross visited him twice since he started his hunger strike.

He was re-arrested by the Israeli authorities on July 8, 2014, two years after he was released from following a 66-day hunger strike against administrative detention, where no formal charges were laid against him.