The ‘S’ in the Palestinian Boycott, Divestment and Sanctions (BDS) Call 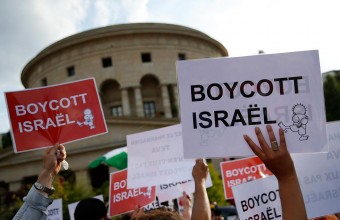 The BDS National Committee website describes BDS as, ‘[t]he global movement for a campaign of Boycotts, Divestment and Sanctions (BDS) against Israel until it complies with international law and Palestinian rights was initiated by Palestinian civil society in 2005… BDS is a strategy that allows people of conscience to play an effective role in the Palestinian struggle for justice.’To date, the elements of boycott and divestment have produced successes after only a few years of the official BDS Campaign’s existence. The Academic and Cultural Boycott with offshoots in the USA, South Africa, India, etc. is able to recruit widespread and prominent supporters from academic and artistic circles. The numbers are increasing and with it the engagement into ending Israel’s non-compliance with international law. The Kairos Palestine Initiative for example has resulted in several churches worldwide discussing the possibilities of partial or full divestment of its stocks from the Israeli market or international companies that contribute to Israel’s prolonged occupation of Palestinian territories.

After ten years of successful struggle, the most urgent issue that needs to be raised today is the ‘S’ in the BDS acronym, or the campaigning for Sanctions against Israel. Sanctions are a powerful tool to force a member of the international community to adhere to international laws and principles. The European Union defines sanctions as, ‘instruments of a diplomatic or economic nature which seek to bring about a change in activities or policies such as violations of international law or human rights, or policies that do not respect the rule of law or democratic principles… Such measures imposed by the EU may target governments of third countries, or non-state entities and individuals.’

Sanctions have been used in several cases and apply in various situations. Sanctions may be applied within bi-national contexts or on the international level. Sanctions are official state policies and could include diplomatic sanctions – withdrawal of diplomatic missions or staff; economic sanctions – full or partial ban on trade goods including arms embargos; and sport sanctions – denying national athletes to compete in international events. Next to these more traditional forms options include the imposition of travel bans or the freezing of assets.

International wrongful acts or crimes might trigger specific state responsibilities. In such a case third states have a duty to cooperate to bring an end to wrongful acts or crimes, including by not rendering aid or assistance and not recognizing the illegal situation arising from such acts. In addition to that, the United Nations as an international body and its member states hold a legal obligation ‘to take joint and separate action in co-operation with the [United Nations] for the achievement of… universal respect for, and observance of, human rights and fundamental freedoms.’

Therefore, all states are under an obligation not to recognize the illegal situation resulting from the establishment of the colonial Zionist apartheid regime in Palestine, also referred to as historic or Mandate Palestine (which includes Israel and the occupied Palestinian territory). They are also under an obligation not to render aid or assistance in maintaining the situation created by such a regime. In relation to South Africa’s illegal presence in Namibia, the International Court of Justice ruled that states had a duty ‘to abstain from entering into economic and other forms of relationship or dealings with South Africa on behalf of or concerning Namibia which may entrench its authority over the territory’.

Moreover, the Draft Articles on State Responsibility adopted by the International Law Commission asks third party states, which witness a violation of a preemptory norm such as the practice of apartheid, to not remain passive and indifferent but to bring an end to the illegal situation by lawful means. Additionally, the responsible state must immediately cease the unlawful conduct and make full reparation.

The General Assembly and the Security Council – acting for instance under Chapter VI and VII of the Charter- should strongly consider what further action is required to bring to an end the illegal situation resulting from Israel’s colonial Zionist apartheid regime. The functions of the Security Council are set down to promote the specific settlement of disputes, based on Chapter VI of the UN Charter, and the exercise of military or non-military enforcement measures under the collective security system, based on Chapter VII. In order to be able to achieve its purpose, the Security Council is endowed with the power to adopt binding decisions which the member states of the UN have to accept and carry out in accordance with the Charter (Article 25). Therefore, it can if necessary take actions – e.g. the imposition of sanctions – that encroach on state sovereignty. Furthermore, the UN Charter itself provides certain sanctions for non-fulfillment of Charter obligations. Article 6 for instance states that a member state which ‘persistently violated the Principles contained in the Charter’ may even be expelled.

The General Assembly has in the past adopted several resolutions recommending to Member States the adoption of economic and diplomatic sanctions, notably in the cases of South Africa and Portuguese territories. More importantly, in 1982 it had called for financial and diplomatic sanctions against Israel in a resolution relating to the Golan Heights. Even though the resolution has not been adopted and/or enforced; calls for sanctions against Israel are increasingly accepted in international forums. The International Court of Justice has emphasized in its 2004 decision on the legal consequences of the construction of a wall in the occupied Palestinian territory the need to refer the situation in Palestine to the relevant bodies, ‘the United Nations, and especially the General Assembly and the Security Council, should consider what further action is required to bring to an end the illegal situation.’

Debate regarding the European Union guidelines that exclude funding of Israeli entities active in the occupied Palestinian territory or the latest international call to suspend the Israeli football federation from FIFA are just two examples of this positive development. More and more states, state officials and private companies are aware of the possible legal consequences their corporations with Israel may entail. In order to promote this momentum, the BDS movement and all supporters worldwide must demand the fulfillment of international law by advancing the ‘S’ in BDS.

Amjad Alqasis holds a LL.M. in international public law and is a human rights lawyer, legal researcher, and a member of the Legal Support Network of BADIL Resource Center for Palestinian Residency and Refugee Rights. For the last four years, he was the coordinator of BADIL’s international and legal advocacy program. Since August 2014, Amjad has been an advisor at Al Haq Center for Applied International Law. He has published several articles and books on various topics concerning the Palestinian-Israeli conflict.