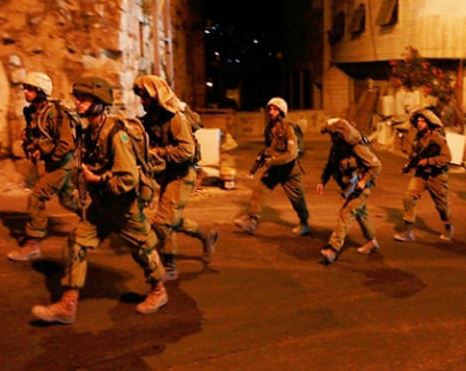 Palestinian medical sources have reported that ten residents, including children, have been injured when Israeli soldiers invaded, on Tuesday at dawn, Jaba’ town, south of the northern West Bank city of Jenin.A number of military vehicles invaded the town, broke into and searched a few homes, and interrogated several families. Soldiers also searched old caves in the town, and around it.

The invasion led to clashes with local youths, who hurled stones on the invading vehicles, while the soldiers fired several rounds of live ammunition, gas bombs and concussion grenades.

At least ten Palestinians, including children, suffered the effects of tear gas inhalation, and received treatment by local medics.

On Monday at night, the Palestinian District Coordination Office (DCO) managed to secure the release of a Palestinian child, identified as ‘Odai Saleh Mansour, 14, a few hours after Israeli soldiers kidnapped him.

The office contacted the Israeli DCO directly after the family informed it of the abduction, and conducted extensive efforts that eventually led to his release.