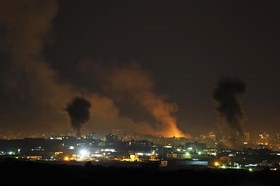 The Israel Air Force carried out, on Wednesday at dawn, a series of air strikes targeting different areas of the besieged Gaza Strip.Media sources said Israeli F-16 fighter jets fired missiles into several areas in Rafah And Khan Younis, in the southern parts of the Gaza Strip.

The Israeli missiles caused property damage to a number of homes and buildings, and anxiety attacks among civilians, mainly the children.

Four Israeli missiles were also fired into a site, allegedly used by the resistance in Rafah, causing damage to several nearby homes and buildings; no injuries were reported.

The Israeli Air Force fired two more missiles into areas, south of Khan Younis, leading to property damage but no injuries, according to initial reports.

A number of homes were also impacted by Israeli missiles targeting a location near the an-Nada Residential Towers, northwest of Gaza City.

In addition, security sources in Gaza said the army fired four missiles into a site used by fighters of the al-Quds Brigades, the armed wing of the Islamic Jihad, west of Rafah.

Two more locations, also run by the al-Quds Brigades, were targeted by Israeli missiles, west of Khan Younis; damage was reported, no injuries.

In addition, the Israeli Air Force fired three missiles into the Hitteen base, used by fighters of the Islamic Jihad, in Beit Lahia, in northern Gaza.

The Israeli army said the shelling was in retaliation for at least one shell, allegedly fired from Gaza into open areas in the Lachish Regional Council of Settlements.

Although Hamas was not behind the alleged rockets, Israel held the movement responsible for the escalation, said it will retaliate, and added that Hamas is responsible for whatever happens in Gaza.

The Ministry of Interior and National Security in Gaza, said it is monitoring the Israeli military escalation, and is conducting the needed measures to counter further aggression by the army.

Related:
Israel Claims A Rocket Was Fired From Gaza Into Southern Area
http://www.imemc.org/article/71719