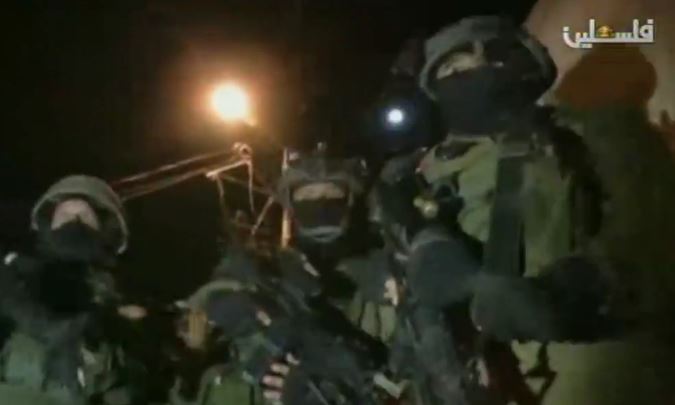 Israeli soldiers kidnapped, Wednesday, eleven Palestinians in different parts of the occupied West Bank, in addition to one woman while visiting her imprisoned son in the Israeli Gilboa’ prison, and one woman on the Erez Terminal, in northern Gaza.In Hebron, in the southern part of the occupied West Bank, soldiers invaded various neighborhoods, stormed and violently searched several homes, and kidnapped three Palestinians identified as Ehab Marwan al-Karaki, 20, Anas al-Hashlamoun, 24, and ‘Odai Raed ‘Asafra, 24.

In addition, several military vehicles invaded ‘Aseera ash-Shemaliyya town, north of the northern West Bank city of Nablus, before the soldiers broke into and searched a number of homes, and kidnapped four Palestinians.

Also in the Nablus district, soldiers closed the Beit Forik and Beit Dajan roadblocks, and prevented the Palestinians from crossing.

Head of the Beit Forik Local Council ‘Aref Haneeni told the WAFA Palestinian new agency that the soldiers closed the roadblocks approximately at 3 at dawn without providing any justification for the closure.

The Palestinian Prisoners Society (PPS) has reported that the soldiers also kidnapped a Palestinian woman, identified as Ebtisam Yousef Taha Hamarsha, 59, from Jenin, while visiting her detained son, who was sentenced to 25 months in imprisonment, and is held in the Gilboa’ Israeli prison.

Soldiers also kidnapped a young Palestinian man in Jerusalem’s Old City, and took him to the military center in the Central Mail Building, near the Sahera Gate; the name of the detained Palestinian remained unknown until the time of this report.

The woman, a mother of seven children from the Nusseirat refugee camp in central Gaza, has been identified as Sana’ Mohammad al-Hafi, 43 years of age.

The soldiers kidnapped, in recent months, dozens of Palestinians, including businesspersons and patients in the Erez terminal, interrogated them, and even tried to get some Palestinian youths, and patients, to become informants and collaborators, in exchange for facilitating their travel.