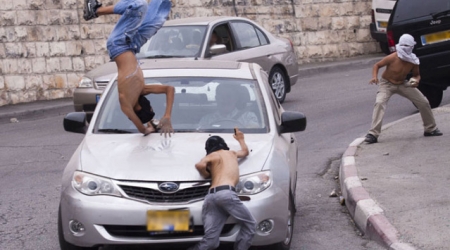 A female Israeli settler ran over a Palestinian youth on Thursday morning, near the West Bank city of Salfit.Witnesses said that the settler approached the youth while he was walking on the platform of the main street in the city. “She hit him and ran away,” an eyewitness said, according to Days of Palestine.

Palestinian medical sources said that the man identified as Ahmed Sultan, age 22, was evacuated to Angelical Hospital in Nablus, by a Palestinian ambulance.

Palestinian medical sources said the youth is suffering from a broken leg, face bruises and internal bleeding, as a result of the collision.

Israeli police said it would open investigation into the incident, but the family of the youth doubted the Israeli intention to achieve justice in the case.

“Based on many many previous cases, the remarks about opening investigations into similar incidents just were made to hung on,” the mother of the youth said.

Such incidents are common in the occupied West Bank, often targeting small children.