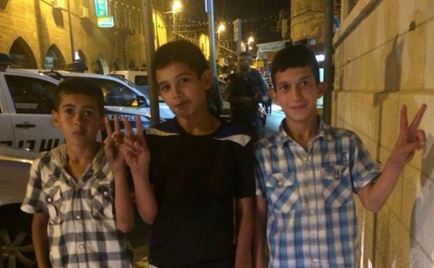 The Israeli Police released, late Thursday night, three Palestinian children from Silwan neighborhood, in occupied East Jerusalem, after detaining and interrogating them for several hours, allegedly for throwing stones at a settler’s car.The Wadi Hilweh Information Center in Silwan (Silwanic) said a settlement guard detained three children in the al-‘Ein area in Silwan, before he contacted the police who later arrived and took them to a police station.

The three children have been identified as Ahmad ‘Ezz Shweiki, 10, Tamer Mazen Shweiki, 12, and ‘Odai Nidal ar-Rajabi, 13 years of age; they were moved to the Police Station in Salaheddin Street.

Friends of the detained children informed their families, and when the parents went to the police station, they were not allowed to see their sons, or attend the interrogation.

The families were forced out of the station and were ordered to leave the entire area, or face imprisonment.

Silwanic said the police interrogated the children without any legal representation. Their parents were finally allowed to see them four hours later, after the interrogation was concluded.

The Israeli extremist threatened the children, telling them they would be taken by social services, and would never be able to see their families again, Silwanic said.

The children told Silwanic they demanded the police to show them the alleged video recording, but the police never presented any recording. The children were forced to sign confessions that were written in Hebrew, a language they did not understand.

It is worth mentioning that Israeli soldiers have kidnapped twenty children, including two between 12 and 14 years of age, in occupied Jerusalem since the beginning of this month.

Preventing parents from being present at the interrogation of their children violates both international.

A lawyer with Silwanic said the army is even acting in violation of Israeli law by holding and interrogating children without any legal representation, and without the presence of social workers.

He said the law bars the interrogation of children without legal representation and without informing social services.

In addition, under Israeli law, interrogators are not allowed to question children without the presence of a specialized detective, and all interrogations are supposed to be recorded.

The lawyer added that Israeli law also instructs the police to inform the parent directly after arresting their children, and to hand them a legal copy of the arrest warrant in addition to informing them of the location where the child is being held.

He also said the interrogators cannot question children without the presence of at least one parent, but the Israeli police and army continue to violate this and other laws.

“It seems Israel makes its own exceptions to the law when it comes to Palestinian children in occupied Jerusalem,” the lawyer stated, “Children are treated as adults, and are interrogated and intimidated for hours, without any legal representation.”