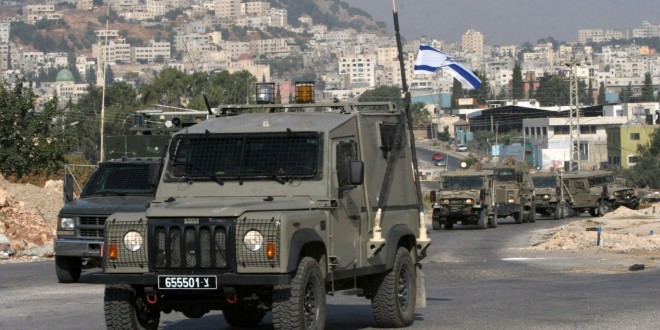 Israeli soldiers kidnapped five Palestinians in the occupied West Bank, in addition to a woman and her son, while visiting her husband in the Eshil Israeli prison, and also kidnapped a physically challenged teen in Hebron, Monday.Media sources in Jenin, in the northern part of the West Bank, said the soldiers invaded the Jenin refugee camp, broke into and searched several homes, causing excessive property damage, and kidnapped three Palestinians.

The soldiers hurled concussion grenades at the homes of the three Palestinians, and detonated their front doors before invading the properties.

The kidnapped Palestinians have been identified as Soheib Adnan al-Ghoul, 20, Farouq Salama, 21, and Yahia Balalwa, 20.

Soldiers also detained a young man, identified as Ahmad Mustafa al-Qneity, for a few hours before releasing him.

The Committee said the soldiers ordered the child, and his father, to head to the Etzion military base for interrogation, and kidnapped him, after accusing him of hurling stones on their vehicles.

Furthermore, soldiers kidnapped a Palestinian woman and her child, while visiting the detained father, imprisoned in the Eshil Israeli prison.

Media sources said the soldiers kidnapped Amina Khaled Manasra, and her child, while visiting her husband ‘Othman Salah, from the al-Khader town south of Bethlehem.

On Monday, the Detainees’ Committee said the soldiers kidnapped a disabled Palestinian teen, in the al-‘Arroub refugee camp, in Hebron.

The Committee said soldiers kidnapped Yahia Mohammad al-Hoor, 19, after invading his family home, approximately at two at dawn, and took him to the Etzion military base.

The teen suffers from a physical disability, in addition to being deaf and mute, and suffers from several health issues that require frequent treatment.