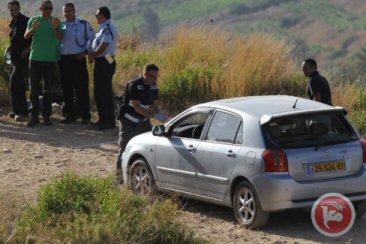 An Israeli was killed and another wounded after a Palestinian opened fire on them near the illegal settlement of Dolov, in the West Bank district of Ramallah, Friday, the Israeli army said.An Israeli army spokeswoman said, according to Ma’an News Agency, that, at around 4:15 p.m., the two Israelis were driving to go on a hike in the occupied West Bank when a Palestinian called on them to pullover, appearing to want to ask about a nearby spring.

He then opened fire on them using a 9mm handgun before fleeing the scene, she said.

Both Israelis were evacuated by military helicopter to Tel HaShomer hospital in Tel Aviv, where one of them ‘succumbed to his wounds.’

A hospital spokeswoman said that the dead man had arrived without any vital signs, having been shot in the chest.

She said the other Israeli had been shot in the hand and was ‘not seriously injured’.

Israeli news site Ynet said they were both 25 years old and identified the dead man as Danny Gonen, a resident of the Israeli city of Lod, though neither police nor hospital spokespeople were able to confirm his identity.

An Israeli manhunt is underway for the Palestinian attacker.

The UN Special Coordinator for the Middle East Peace Process, Nickolay Mladenov, condemned the shooting and called on ‘all sides to exercise the utmost restraint, to maintain calm and promptly bring the perpetrators to justice.’

West Bank settlements are illegal under international law, and Israelis have been attacked previously in and near them as well as in annexed East Jerusalem.

There have been a number of attacks by Palestinians on Israeli military and civilians over the last year, largely in the wake of Israeli activities across the occupied Palestinian Territories, including last summer’s offensive on Gaza which left more than 2,200 Palestinians dead.

In the same time period, an average of 39 Palestinians have been injured by Israeli forces per week and 13 killed, two of whom were killed since the beginning of this month.