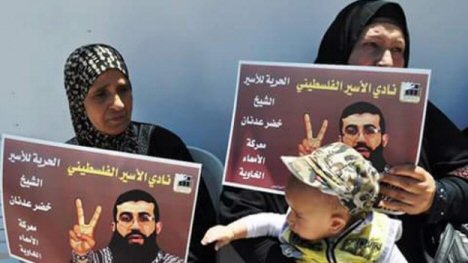 The International Committee of the Red Cross (ICRC) said Tuesday it was concerned about the deteriorating health and critical condition of Khader Adnan, a Palestinian detainee in Israel, who has been on hunger strike for 50 days to protest his administrative detention, without charge or trial.Jacques de Maio, the head of the ICRC’s delegation in Israel and the occupied Palestinian territory said he was concerned that Adnan’s life was “at immediate risk”. He suggested that “any solution must, however, take into account the necessity of protecting the detainee’s moral and physical integrity.”

He urged the Israeli authorities to allow Adnan’s family to visit him, noting that it has been more than two months since he was granted a family visit. “Under the Fourth Geneva Convention of 1949, detainees have a right to be visited by their families. Given the circumstances, permitting his relatives to visit Mr Adnan, without delay, is the right thing to do,” said de Maio.

The Israeli government is currently advancing legislation that would mandate the forced feeding of hunger striking prisoners if authorities deem their life to be in danger. Such legislation violates international law, and Israel’s medical association has come out against it.

The Palestinian Prisoners Club has called for demonstrations in solidarity with Adnan and Ayman Shalabi, a prisoner from Jerusalem on hunger strike since early June. A solidarity protest was held last Friday in Jerusalem’s al Aqsa mosque compound.

And on Monday a sit-in solidarity protest was held in Hebron, in the presence of Hebron’s governor and representatives from Palestinian factions.