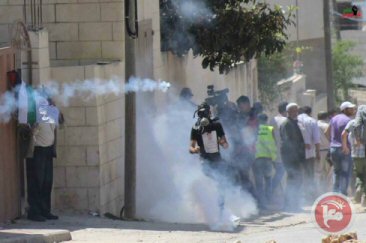 Israeli forces shot and injured a 14-year-old Palestinian boy with live ammunition on Saturday when they opened fire on a march in the West Bank village of Kafr Qaddum, near Qalqiliia.A local popular resistance coordinator, Murad Shteiwi, said that hundreds of Palestinians took part in the march, which set off following afternoon prayers toward an Israeli barricade that closes off the main entrance on the village’s southern side.

Dozens of Israelis soldiers reportedly fired live rounds and tear gas at the protesters, resulting in the injury of 14-year-old Mohammad Abdul Ilah, who was shot in the thigh.

He was taken to Rafidia Hospital for treatment, Shteiwi said.

According to Ma’an, an Israeli army spokeswoman asked to provide comment said she was looking into the incident.
Shteiwi said that Saturday’s march came in response to an increase in violations as part of the Israeli military-administered occupation.

He said that it was additional to the village’s weekly marches, which are held on Fridays and call for the reopening of the village’s southern entrance, which has been closed 13 years.

Earlier this month, on June 12, five Palestinians were injured, including two critically, when Israelis forces opened fire on the weekly march.

Kafr Qaddum has lost a large swathes of its land to Israeli settlements, outposts and separation wall, all illegal under international law.

According to the Applied Research Institute of Jerusalem, more than 10 percent of the village’s land has been confiscated for the establishment of the settlements alone — Kedumim, Kedumim Zefon, Jit, and Givat HaMerkaziz.

The internationally recognized Palestinian territories have been occupied by the Israeli military since 1967.