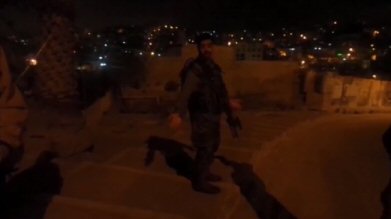 Yesterday, 26 of June 2015 approximately 21:30, nineteen year old Hatem Al Mohtaseb from Tel Rumeida, Hebron, was walking up the hill of Tel Rumeida when an Israeli soldier detained him and asked for his ID.

After the soldier had finished checking the Palestinian ID, the Israeli soldier then threw the ID on the concrete and told him to pick it back up.

A nearby Palestinian then picked the ID up off the ground and gave it to Hatem Al Mohtaseb. International Solidarity Movement activists that were present then walked up the hill and were discussing with the Palestinian man what had just happened. The same soldier came up to Hatem Al Mohtaseb and told him to move from the spot where he was standing in his own neighborhood. Hatem Al Mohtaseb then refused to move and the soldier aggressively shouting in Hebrew, then attempted to arrest him but ISMers stood in the way and prevented the arrest.

The soldier then complained to several male settlers walking up the road to the nearby illegal settlement. One of the settlers came right up to the activists, calling them sick people and Europa Nazis before leaving. After this point the soldier’s commanding officer had arrived and after speaking to Hatem Al Mohtaseb he decided not to follow up on
the arrest.