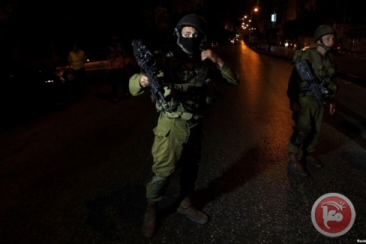 Israeli forces carried out multiple detention raids across the occupied West Bank, overnight Monday, after three Israeli settlers were injured in a shooting south of Nablus and an explosive device was allegedly hurled at a settler vehicle near Ramallah.Dozens of settlers from the illegal settlement of Beit Eil were also reported to have attacked Palestinian vehicles on the road between Ramallah and Nablus.

The violent reprisals come as the president of the Shomron regional council, which groups together illegal Israeli settlements in the northern West Bank, said in a statement that ‘we must not let terrorism spread.’

‘I call on the government to authorize the army to act without pity against these savages who take civilians for targets,’ he said.

The Israeli army reported that three Israeli settlers were injured in Monday’s shooting while driving near the West Bank village of al-Mughayir.

Israeli media said four settlers were injured in the attack.

Israeli forces in the early hours of Tuesday stormed al-Mughayir and made multiple detention raids.

They added that the soldiers deployed on every street corner in the village after setting up military checkpoints at its entrances.

Worshipers who tried to go to mosques for dawn prayer were denied access and forced to return to their homes, they said.

Meanwhile, fierce clashes broke out between young Palestinians and Israeli soldiers late Monday after they stormed the village of Kafr Malik east of Ramallah.

Locals told Ma’an News Agency that the soldiers broke into shops and gas stations where they seized surveillance cameras.

Palestinian youth confronted the soldiers with stones and empty bottles as they deployed through the villages streets.

Israeli forces were also reported to have stormed the villages of Deir Jarir, Ibwein and Ajjul north of Ramallah and seized surveillance cameras from shops.

Witnesses said a checkpoint was set up at the entrance to the village of Atara north of Ramallah.

Separately, dozens of Israeli settlers from the illegal Beit El settlement near Ramallah threw stones at Palestinian vehicles travelling between Ramallah and Nablus.

Witnesses said that several vehicles were hit and many drivers chose to take other roads to avoid the section close to the illegal settlement.

Clashes later broke out when Palestinians from al-Jalazoun threw stones and fireworks at the settlers and Israeli soldiers rushed in, firing tear gas canisters, stun grenades and rubber-coated steel bullets.

Monday’s shooting came following a string of ‘lone-wolf’ attacks by Palestinians on Israeli military and civilians.

Earlier on Monday a Palestinian woman was arrested after she stabbed an Israeli soldier at the 300 checkpoint in Bethlehem, and on June 21 another Palestinian was shot after stabbing an Israeli border policeman in occupied East Jerusalem.

In the same time period, however, an average of 39 Palestinians have been injured by Israeli forces per week and 13 killed, including two since the beginning of this month.