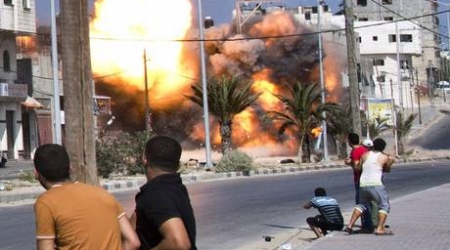 The British government has been accused of ignoring evidence that its weaponry may have been used by Israel in its assault on Gaza, last year, after fresh arms deals worth £4m were approved by Britain within weeks of the conflict. (Al Ray) Figures seen by The Independent reveal that the UK gave the go-ahead for dozens of military exports to Israel, including components for drones and air-to-surface missiles, in the immediate aftermath of Operation Protective Edge, which claimed more than 2,000 lives, including those of hundreds of Palestinian civilians.

Campaigners said the exports showed that the Government was conducting “business as usual” in its arms sales to Israel and turning a “blind eye” to the risk that UK-made weaponry could be used in any fresh clashes between the Israelis and the Palestinians.

Last year’s bombardment provoked calls for Britain to halt all arms exports to Israel after ministers admitted they had found 12 instances where weapons containing British components may have been used in the Occupied Territory by Israeli forces.

The refusal of the Government to suspend these licences caused a split in the Coalition and led to the resignation of Foreign Office minister Baroness Warsi, who said Britain’s stance during the air and sea assault had been “morally indefensible”. She said all arms sales should be stopped with immediate effect.

Ministers pledged last year to review all existing licences to Israel to assess the risk of British weaponry being used in the Occupied Territories and publish the results.

But new figures published today in a report on arms exports show that Britain has in the meantime continued to sell weaponry worth millions to Israel, both directly and via third party countries including Germany, America and Italy.

Andrew Smith, spokesman for Campaign Against Arms Trade, said: “More than 2,000 people died in Israel’s bombardment of Gaza, and yet in the months immediately following the conflict it was business as usual for the UK Government and the arms companies it supports.

“Even the government has admitted it’s highly likely that UK weapons were used against Gaza last year. Now it is turning a blind eye to its own evidence. These arms sales send a message that arms company profits and military contracts are more important than the human rights of Palestinians.”

In the three months between the end of hostilities in Gaza in August last year and the end of December, the Department for Business, Innovation and Skills (BIS) approved 32 military exports from Britain to Israel worth £3.97m. The first licence was granted on 1 September – just six days after the announcement of an Israeli ceasefire.

Some £2.5m of that total was for items going directly to Israel, including components for military radars, submarines and jet engines.

The remainder was for the incorporation of UK-made weaponry, including components for military pilots’ head-up displays and military combat vehicles, into products to then be re-exported to other destinations, including Thailand and United Arab Emirates.

The data, based on the Government’s own quarterly arms export statistics, also details 36 further licences granted for British components sent to destinations including Germany, Italy and United States for incorporation into weaponry which was then to be sold to Israel.

The material included parts for air-to-surface and surface-to-surface missiles, components for combat helicopters and tank turrets, and material used for the command and control of drones.

At least two of the 12 pre-existing arms licences which the Government now admits were for weaponry which may have been used in Gaza were sent to Israel via Germany and the US.

Campaigners argue that the latest exports contain similar material which could also be used by Israeli forces if hostilities recommence in the Occupied Territories.

The Independent revealed earlier this year that the Government also approved arms exports worth nearly £7m to Israel in the six months prior to Operation Protective Edge, which Tel Aviv said was necessary to halt rocket attacks from Gaza by Hamas fighters.

Ministers have previously defended Britain’s exports to Israel by saying the country has a right to self-defence and the UK only grants licences where it is satisfied material will not be used for “internal repression” or to “aggravate existing tensions or conflicts”.

But the report by CAAT, War on Want and the Palestine Solidarity Campaign alleges that Britain is flouting its own rules by continuing to allow the export of material which carries the risk of being used in any future Israeli-Palestinian conflict.

David Wearing, the author of the report and a researcher at London University, said: “Ministers’ claims that the UK enforces stringent controls on arms exports simply do not stand up to scrutiny.

“Aside from the question of how individual pieces of UK-made kit are used, the approval of £4 million of military exports in the wake of Operation Protective Edge demonstrates a strong preference to maintain business as usual irrespective of what message this sends to Israel about its behaviour.”

Critics of Britain’s arms exports control system argue there are now repeated examples of the use of British-made weaponry in the Occupied Territories over the last 13 years, including the deployment of armoured personnel carriers and the use of F-16 fighters and Apache helicopters containing UK components.

The IDF’s Hermes drone was also deployed last year over Gaza. A version of the drone, used to pinpoint targets, contains components made by British companies but it is claimed this version was not used in Gaza.
A United Nations report last week accused both Hamas and Israel of repeated potential or likely violations of international law, including suspected war crimes, during last year’s conflict, which claimed 2,251 Palestinian lives, including hundreds of militants as well as civilians, and 73 Israelis, of whom 66 were soldiers.

The study for the UN Human Right Council said Israel may have targeted some residential properties with jets and drones without the justification of a legitimate military target and this may have constituted a war crime. Israel angrily rejected the claims as “biased” and said it was wrong to conflate its actions with those of a terrorist organisation such as Hamas.

The Government said its review of arms export licences to Israel, ordered last year, was ‘due to complete shortly’ and insisted its monitoring of the situation in the Occupied Territories was taken into consideration when granting licences.

A spokeswoman said: ‘We will only approve equipment which is for Israel’s legitimate self defence and where we are satisfied it would be consistent with our human rights commitments and other international obligations.”