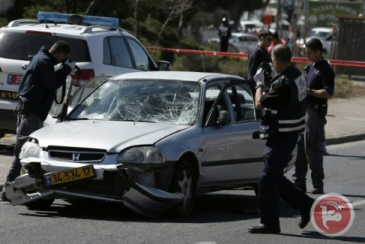 A Palestinian who injured four Israeli border policewomen and a civilian when he drove his car into them was sentenced Sunday to 25 years in prison, the Israeli justice ministry said.Court documents released by the ministry said that Muhammad Sleiman, a 22-year-old from occupied East Jerusalem, admitted to five counts of attempted murder in a plea bargain.

Ma’an further reports that, in March, Sleiman drove his car into a group of Israeli border policewomen as they crossed a busy road outside their base near the line separating West and East Jerusalem, injuring four of them.
He then hit a civilian cyclist, according to the court transcript.

‘Immediately afterwards, the accused stopped his vehicle, and got out, carrying an axe,’ it said. Reports at the time said he had carried a knife.

The transcript said that he then ran toward a border policeman and a security guard at the base entrance who both ordered him to halt, then shot and wounded him when he continued to advance.

The prosecution said the attack was premeditated.

In addition to the jail term, Sleiman was ordered to pay compensation totaling 260,00 shekels ($68,420).
The March 6 incident was one among a number of car attacks — mostly hit-and-run — to have been carried out by both Palestinians and Israelis in the last year.