The Practicalities Of The Palestinian Right Of Return 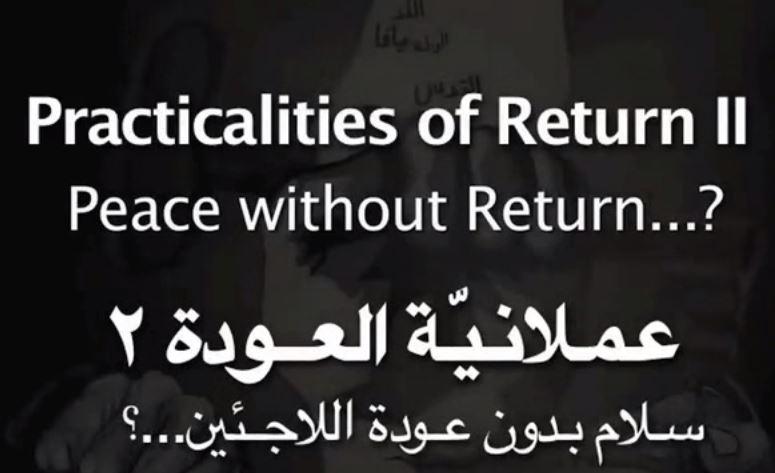 BADIL, the NGO that protects and promotes the rights of Palestinian refugees, recently released a new video as a follow-up to an earlier video entitled Practicalities of Return.

Their latest production, Practicalities of Return II: Peace without Return?, covers issues such as sustainable peace with a rights-based approach, the inherently racist nature of Zionism and how the implementation of the Palestinian right of return might look.

The main message running throughout the video is that there will be no viable peaceful solution without allowing Palestinian refugees to exercise their right of return.

“The whole idea of the rights-based approach is that it should not cause another displacement or conflict,” says Dr Manar Makhoul, director of research and production at BADIL.

“It would accommodate the rights of both parties within a transitional justice mechanism that is set up by both parties. There would be committees that would deal with secondary occupation, where a Jewish-Israeli family lives in a Palestinian home, for example.”

What’s crucial, he says, is that Israeli Jews and Palestinians are treated equally: “The primary right would be for the Palestinian family to return to their home, but this should not be on the expense of the Jewish-Israeli family, who should expect to receive alternative housing.

In cases where Palestinian families cannot return to their homes or retrieve their lands, alternative solutions can be brought up. Of course, Israel must be de-Zionised and decolonised.”

Although entirely practically possible, the right of return is a threat to Israel as a Jewish state. So while it’s an inarguable, inalienable right from the Palestinian point of view, it’s a non-starter from the mainstream Israeli perspective.

Mahmoud Abu Joora is a Palestinian living in Bethlehem. “We believe ’48 refugees will return to their original towns, like Haifa and Jaffa, some day,” he tells me. It’s not clear how many would choose to exercise the right of return by physically returning to land once inhabited by themselves and their family, but in principle, this right should be applied.

Unsurprisingly though, in 20 years of negotiations, as director of Israeli Nakba remembrance NGO Zochrot Liat Rosenberg points out in the video, the right of return has not been a core issue at the table. And until it is, she says “we would not be able to see a viable solution or just peace.”

Zochrot and Liat’s position are at odds with large portions of the Israeli Left and liberal Zionist contingent. Even Meretz, one of Israel’s most progressive political parties, is fixated on how to preserve the achievements of the Nakba, according to Sergio Yahni of the Alternative Information Center, also featured in BADIL’s video.

In other words, their focus is on how to ensure the state of Israel maintains its Jewish majority, for example with the establishment of a Palestinian state alongside it. In such a proposal, no credence is given to those Palestinians whose place of origin is within green line Israel (otherwise known as ‘48 Palestinians). Their right to return to locations within the state of Israel would largely be denied.

Refugees make up two thirds of the entire Palestinian population worldwide. As of the end of 2014, BADIL’s figures cite 7.9 million Palestinian refugees, 5.1 million of whom are UNRWA registered. 6.1 million of the total amount are ’48 Palestinians and 1.1 million are ’67 Palestinians, who were displaced from the occupied territories when Israel took control of them 48 years ago.

Practicalities of Return II: Peace without Return from BADIL Resource Center on Vimeo.

The remainder are internally displaced persons who still live in Israel or occupied Palestinian territory, just not within their original homes. Palestinian refugees and their descendants, who are automatically defined as refugees as well, represent one of the largest, longest-standing populations of refugees in the world.

Over 760,000 refugees in the West Bank living in 19 refugee camps, experience overcrowding, severe water shortages, poor sanitation and more. Some can afford to buy expensive land in areas A and B, others apply for building permits in Area C or build illegally—risking demolition—when they are rejected, as was the case with 97.7 percent of all applications made between 2008 and 2012.

The 1.2 million Palestinian refugees in Gaza, who make up over 66 percent of the Strio’s population, are subjected to cyclical violence and the difficulties of living under siege with little opportunity to escape these conditions.

For refugees in UNRWA camps and makeshift homes in Syria, Jordan and Lebanon, living conditions are at best difficult and at worst, in the case of the infamous Yarmouk camp which has been subject to ISIS rule, starvation and disease, ghetto-like.

Palestinians are being forcibly displaced to this day, with Israeli policies in place such as denial of residency, land confiscation and segregation, and so the refugee problem is only growing.

According to BADIL, justice and freedom for the displaced Palestinians from 1948 and 1967, and their descendants, is both necessary and feasible.

“According to international law, all of these refugees have the right to return to their original homes, or should be given compensation or property restitution,” says Manar. “We do not believe that the right of return will cause problems.”

His reference to ‘problems’ refers back to the mainstream Israeli view that sees the right of return as a threat or an impracticality.

From the Zionist standpoint, it is either a non-starter, or only very partially possible: “If Israel were to open its gates to non Jewish immigration there is real concern that it would threaten the Jewish flavour of the state,” says David Ha’ivri, a settlement leader in the West Bank and political activist.

“Through a process of nationalisation, some could immigrate and become citizens, but there would be an application and review process just like immigration to other ‘in-demand’ countries.”

In his part of BADIL’s video, Manar goes on to cite other international examples where demographic ‘facts on the ground’ have been altered and justice has prevailed. “In South Africa there were creative solutions to solve land issues. In Bosnia-Herzegovina there were creative ideas employed to address housing issues. Any creative solution must be democratic and built on rights, and this is certainly possible. In any case, any creative framework must not create privilege for one side at the expense of another.”

Considering past world events, it seems like it’s just a matter of time until Israelis and Palestinians live side by side as equals in the Holy Land. Raouf, the owner of a bakery in Berlin, doesn’t fit the image of an impoverished refugee living in cramped conditions, but his parents fled Acre during the Nakba. He talks about the right of return with all the certainty with which night follows day. “Of course we will all go back to our homeland.” It’s not a question of if, but when, and how.

Throughout history, of course, countless wars and mass displacements have occurred where the right of return has not been implemented. “People around the world have lost their properties and have been resettled in other locations. Rights are not always practical,” says David Ha’ivri.

But while many Ashkenazi Jews have chosen to exercise their own ‘right of return’ to go and live in Europe in the former homelands of their grandparents, Palestinians are categorically denied from doing so.

After all, the Israeli-Palestinian conflict centers around the demographically pure nature of the Jewish nation state. Just as the number of Palestinian refugees has been growing since 1948, so has the gap between Zionism and justice.

Hayley is a freelance journalist covering media, society and culture, predominantly in the Middle East. Her blog is at hayleyjpearce.com and her Twitter is @hayleyjpearce