Army kidnaps A Palestinian In Jenin 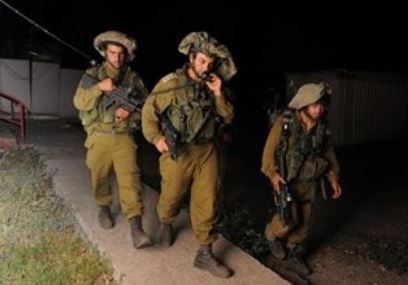 Israeli soldiers kidnapped, on Thursday at dawn, a Palestinian university student from Rommana village, west of the northern West Bank city of Jenin.Eyewitnesses said a large military force invaded the village after surrounding it, before several soldiers broke into the home of Mohammad Abu Saifein, violently searched it, and kidnapped his son Mahmoud, 21 years of age.

Dozens of soldiers were also deployed in different neighborhoods in the village, and clashed with local youths who hurled stones and empty bottle on them, while the army fired rounds of live ammunition, gas bombs and concussion grenades.

In related news, a Palestinian detainee, identified as Ahmad Jamal Shanayta, 36 years of age, received an Administrative Detention order without charges, for the third consecutive time.

Shanayta was kidnapped in November 20 2014, and has been held under repeatedly renewed Administrative Detention orders.

He is a married father of four children, from the al-‘Obeydiyya town, in the West Bank district of Bethlehem.