Half of Susiya to be Demolished after Ramadan 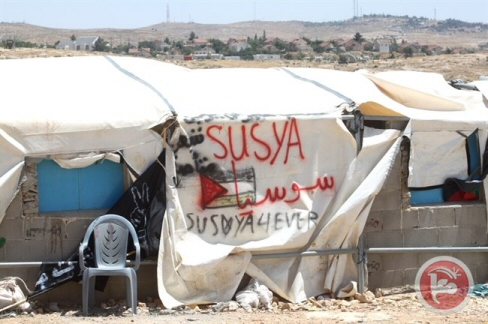 Israeli authorities ordered the demolition of around half of the homes, in a village south of Hebron, to be carried out after Ramadan, Israeli watchdogs said on Wednesday.Rabbis for Human Rights and B’Tselem said, in a statement, that pressure from Israeli settlers had led to the decision to carry out demolition orders in the village of Khirbet Susiya after Ramadan, although a high court hearing regarding the case is currently scheduled for August 3.

The court case has been ongoing since 2012, when residents of Khirbet Susiya applied for the Israeli Civil Administration to approve an outline plan for northern part of the village.

Susiya villagers reportedly built homes in 1986 on agricultural land they owned, after being evicted by Israel from their previous dwellings on land declared as an archaeological site.

Situated in Area C, an area covering 60 percent of the West Bank which is under full Israeli control, villagers of Khirbet Susiya must apply for construction permits from the Israeli Civil Administration.

In practice only a handful of Palestinian applications for construction or expansion on existing structures are approved, with only six percent of Palestinian building permit requests granted by Israel between 2000 and 2012.

Unable to get ‘legal’ permission, Palestinians are faced with either leaving or building illegally.

Since 1988 Israeli forces have issued more than double the amount of demolition orders to Palestinians in Area C than they have to illegal Israeli settlements in the area.

Rabbis for Human Rights alleges that the newest threat is a form of coercion that aims to expel residents of the area already before the court hearing.

The head of the Susiya village council Jihad al-Nawajaa said the residents have been asked to be evacuated on the pretext that the village lacks sufficient infrastructure for living.

Meanwhile, the Israeli government provides the necessary services to the nearby Israeli settlement of Susiya.
Last year Israel demolished 590 Palestinian-owned structures in the West Bank and East Jerusalem, displacing 1,177 people, according to the UN Office for the Coordination of Humanitarian Affairs (OCHA).

The upcoming demolition of Khirbet Susiya comes while member of Israel’s right wing government are pushing a plan to forcibly relocate tens of thousands of Palestinian Bedouins.

Approved without any consultation with the Bedouin community, the plan would evict nearly 40,000 Bedouins from their villages and force them to live in concentrated areas that critics called ‘reservations.’
Israel currently refuses to recognize 35 Bedouin villages in the Negev, which collectively house nearly 90,000 people.