Army Kidnaps Six Palestinians In Hebron, One In Tulkarem 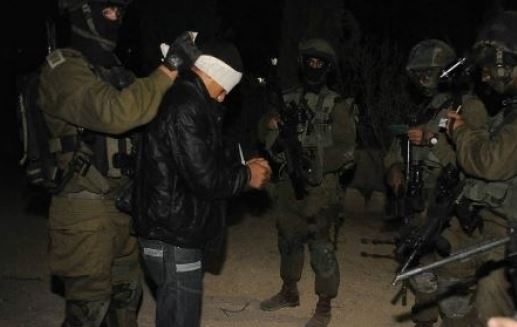 Israeli soldiers have kidnapped, earlier on Thursday, six Palestinians, including a father and his two sons, in the southern West Bank district of Hebron, and one in the northern West Bank city of Tulkarem.Media sources in Hebron said the soldiers invaded the ath-Thaheriyya town, south of the city, stormed and searched several homes, and kidnapped Khalil Jabarin, 30, Mojahed Jabarin, 45, and ‘Ayesh ‘Oweida, 42 years of age.

The soldiers also invaded homes in the al-Majd village, southwest of Hebron, and kidnapped Majed Abdul-Qader ‘Amro and his sons Amjad and Ashraf.

In addition, soldiers invaded Ektaba area, east of the northern West Bank city of Tulkarem, and kidnapped one Palestinian identified as Mohammad Ahmad Qassem, 30 years of age, after violently searching his home.

His brother said the soldiers also confiscated a Taxi his brother drives.

Earlier on Thursday, soldiers shot and killed a Palestinian man after storming his home to kidnap one of his sons. Army also shot and injured two of the slain man’s sons, and kidnapped one Palestinian. http://www.imemc.org/article/72332