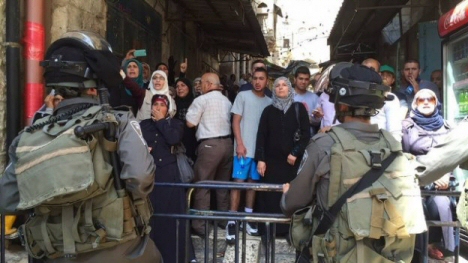 These attacks are related to Israel’s Sunday morning invasion of Jerusalem’s al Aqsa mosque complex, during which some 16 Palestinians were wounded by rubber-coated steel bullets and tear gas inhalation, whilst three were arrested. Four Israeli police officers were reported wounded in the clashes.

Following public calls by settler-affiliated groups to invade the al Aqsa mosque compound Sunday morning for the Tish’a Ba’av Jewish holiday taking place, Palestinian youth barricaded themselves inside of the mosque Saturday night. Acting on intelligence, Israeli police targeted not the settler group members but Palestinian residents of Jerusalem. Amjad Abu Asab, head of Jerusalem’s detainee and prisoners families committee, reports that police arrested 16 Palestinians on Friday night and early Saturday morning, a majority of them in the Old City.

Israeli authorities further imposed restrictions on religious freedom for Muslims, limiting today’s access to al Aqsa to Palestinians over the age of 50 and women, although barring both of these groups from 7:00 a.m. when a large group of Israeli settlers was escorted into the mosque compound. Approximately 850 Israelis entered the compound on Sunday, including agricultural minister Uri Ariel (Jewish Home).

The Al Aqsa compound is the most volatile religious site in Palestine. The Second Intifada began after Ariel Sharon visited the compound with an escort of thousands of policemen in September 2000. Clashes in Jerusalem and across the whole country have sporadically erupted since the British occupation of Palestine following any attempts to change the status quo of the holy site.

More photos and info at the Alternative Information Center.