Israeli Spy to be Paroled by US November 21st 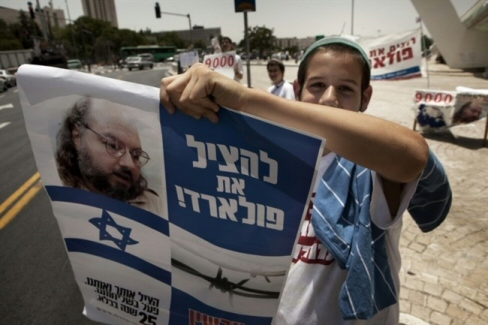 Jonathan Pollard, a former US Navy analyst convicted of spying for Israel, will be released on parole November 21, after serving 30 years in prison, his lawyers said Tuesday.’The decision to grant parole was made unanimously by the three members of the (US) Parole Commission, who make their decisions independently of any other US government agency,’ the lawyers said in a statement. ‘The decision is not connected to recent developments in the Middle East.’

According to AFP, the statement comes amid allegations that Pollard’s release is tied to attempts by the US to make reparations to Israel following the recent nuclear deal with Iran.

Israel vehemently opposed the deal that was sealed earlier this month under which Iran promised major world powers to dismantle or mothball much of its nuclear industry in return for an easing and eventual lifting of international sanctions against the Islamic republic.

Israeli lawmaker Nahman Shai, chairman of parliament’s lobby for Jonathan Pollard, said on Sunday that he believed a decision to release Pollard could be linked to the storm over Iran.

‘The Americans are looking for ways to placate Israel, there’s no doubt about that,’ Shai, of the opposition Zionist Union party, told public radio.

‘They are aware of the anger and bitterness in Israel, both in political circles and among the general public. ‘Pollard in their eyes is a kind of candy which could sweeten somewhat the bitterness over the Iran agreement.’

A US-born Israeli, Pollard was arrested in 1985 and two years later was sentenced to life in prison for passing American intelligence on Arab and Pakistani weapons to Israel.

Pollard becomes eligible for parole in November, and the US Justice Department indicated on Thursday that it would not oppose his release.

‘The Department of Justice has always and continues to maintain that Jonathan Pollard should serve his full sentence for the serious crimes he committed, which in this case is a 30-year sentence as mandated by statute,’ its spokesman Marc Raimondi said.