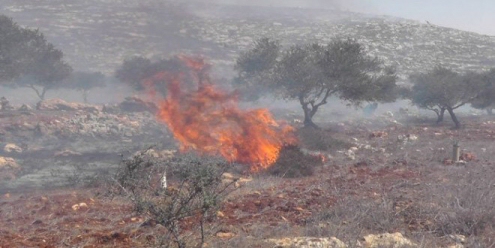 Israeli settlers, Monday evening, have torched tens of olive trees located on private Palestinian land in ‘Azzoun town, to the east of Qalqilia, northern West Bank.Security sources said that civil defense forces headed to the land and put out the fire, which had already damaged a number of trees.

Settlers, by then, had fled the scene.

Israeli settler attacks on trees have been on the increase now, especially with the support of Israeli soldiers and police, destroying trees under ‘security’ pretexts.

On Sunday morning, a horde of Israeli settlers set fire to dozens of Palestinian olive orchards and cultivated lands in al-Mugheir village, east of Ramallah city, just moments after they failed to torch a Palestinian family home.

According to the Palestinian Information Center, eyewitnesses said a gang of Israeli vandals residing in an illegal settlement nearby tried to burn down a Palestinian family home before they were stopped by local residents.

Israeli occupation forces showed up at the scene and attacked the locals with random spates of tear gas canisters and rubber-coated metal bullets.

On 22 July, soldiers uprooted a number of trees, destroying an agricultural area in Beit Oula village, near Hebron, under security pretext.

The land and trees are the property of citizen Faried Atrash. Israeli forces previously told him to uproot the trees for alleged security reasons, but he refused. Soldiers then savagely destroyed the land, ensuring that it cannot be restored to its original state.