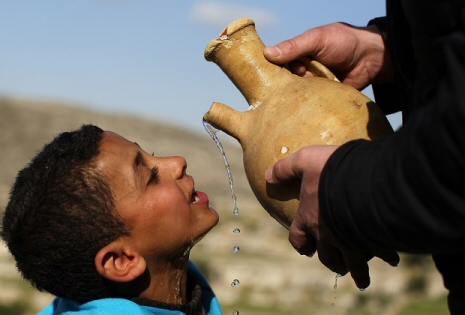 During the hottest month of the year, the Israeli occupation has cut off water from three more Palestinian villages in the occupied West Bank.The villages of Qarawat Bani Hassan, Biddya and Sarta, in the West Bank cityu of Nablus, have received only a partial supply of water, leaving almost half of their residents without running water on certain days.

“Following the decrease in water pressure, all the houses that are in the higher parts of the towns were left without a drop,” he said, according to Days of Palestine.

Rifat Mari was one of the residents left without water. “I have three children and I need to walk for kilometres to a spring that has a stream of water in order to fill bottles for the kids. We did not have showers for several days.”

The serious shortage, last week, led the village mayors to organise a protest outside the main water pump.

Israeli military troops, police,and Civil Administration officials arrived to try to restore calm and promised residents that the problem would be solved, but that was an attempt to supress protests calling for rein station water supply.

Meanwhile, the villages are being helped by neighbouring Palestinian villages, which send water tankers every few days, but this is not enough.

“The residents are furious at me,” said Aasi. “They think I have a button next to my bed that turns the village’s water on and off.”

Mekorot recently decided to adjust the water because of increased consumption, causing shortages in only the Palestinian villages, leaving them suffering.