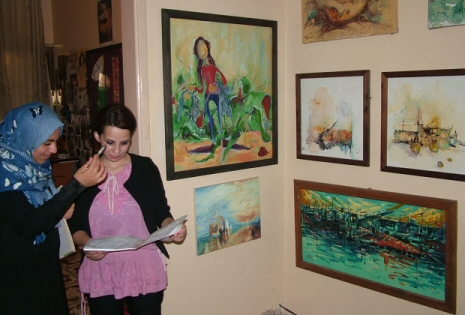 In her small atelier surrounded by hundreds of small, medium and large portraits, Palestinian painter Majdal Nateel from the besieged Gaza Strip uses her skills to express her hopes for the future through her very simple, yet beautiful and expressive, drawings and paintings.Young mother Nateel looks after her family and home, but this has never been an obstacle on her way to see the world in the way she imagines it to be. “I am ambitious,” she said. “I had the ambition to serve the people of Palestine, as well as the Palestinian cause and, ever since I was a little girl, I thought to spread the word about Palestinian suffering.”

However, like other Palestinians, she has no well-known platform from which to address people. “So I created my own platform. With primary gifted talent, I started to express my messages through my simple paintings while still at preparatory school.”

Her first drawings attracted the attention of her art teacher, who began to pay more attention until she became more skilful. “This led me to win many drawing competitions held for Gaza’s young artists, which paved the way for me to become a bit famous.”

Despite her desire to stay at home to develop her skills and help her two little daughters and husband, who leaves for work at 8am every day and returns at 5pm, she felt that she was needed to help bereaved women and children in the many shelters around the Gaza Strip.

They are among the half-a-million people who were displaced when their houses were destroyed during last year’s 51-day Israeli offensive on the territory, which also killed more than 2,200 Palestinians, mostly civilians.

The UN estimates that nearly 400,000 children in Gaza require some form of counselling and trauma therapy to cope with the events they witnessed or experienced during the 2014 offensive, when the Israeli military rained down death and destruction on the densely populated coastal strip.

“I could not stay at home then,” explained Nateel. “I went out to Al-Karmel Secondary School, which was hosting more than 800 women and children. I started helping the displaced, and their stories fascinated me. I listened to children narrating tales of horrible escapes under heavy Israeli bombardment at their houses in Al-Shejaia neighbourhood.”

She listened to women who had left dead family members behind. “One woman who gave birth to a baby boy just two weeks before the war left three dead family members behind, including her husband. She suffered too much to make her baby sleep where there was no cradle. She used a school chair and placed it upside down like a cot and kept moving it until her baby fell asleep.”

As the Israeli offensive ended, the stories and scenarios remained alive in Nateel’s heart and mind. “I could never forget all those heart-breaking stories with the horrible images they conveyed,” she said. “I decided to use my talent to document them, but I was not aware that such simple and imaginative drawings would be chosen to be the medium to pass the message of those children to a British audience.”

Nateel was referring to a competition announced by London’s P21 Gallery which she entered; she was chosen to draw 400 small pictures to be displayed in London and which would convey the message of the suffering of the Palestinian children. “I was chosen for the project,” she said, “but I was told that I had to guarantee the delivery of the drawings to the gallery myself. That was a real challenge for me.”

Nevertheless, she accepted the nomination without hesitation despite knowing that she might not be able to deliver the drawings. Wasn’t she worried that the Israelis and Egyptians, who control the only two crossings out of Gaza, would not allow her work to leave the enclave? “As always, I was confident and hopeful. We, the Gazans, must live on hope; otherwise, we die of stress.”

Each of the 400 small drawings of the inspired Palestinian painter reflects the message of a child who was killed by the Israeli bombardment during the war. All of the drawings were painted on fragments of the paper bags used to deliver the limited amounts of cement to families whose homes were bombed.

This is very symbolic, believes Nateel, as restrictions on the entry of cement and other construction materials mean that many of the children who survived the war are still without homes. “The message of each child is: ‘If I was not there [under the Israeli bombardment], I would have remained alive and I would have been practicing my life this way’ [as it is expressed in the drawings].”

“Jon Snow at my house”

In July, Nateel, along with dozens of other young Palestinian artists, took part in a local exhibition to reflect the life of the Palestinian children and women during the war. The exhibition attracted the attention of a wide range of artists, journalists, reporters and cameramen from various parts of the world.

“Jon Snow must have been one of them,” she said. “Someone knocked at the door of my house and said that he was a producer working with the famous Channel 4 presenter Jon Snow from Britain and that he wanted to meet me. Wow, I said, this is my chance to talk to a wider audience about my experience.”

This item was first published on the MEMO on Wednesday, August 12, 2015.