Army Demolishes A Home In Jenin 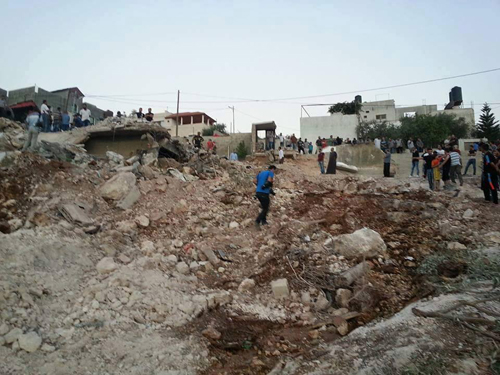 Israeli soldiers demolished, on Tuesday at dawn, the home of former political prisoner Majdi Raja Abu al-Haija, and kidnapped him, in the al-Hadaf area, in the Jenin refugee camp. The soldiers earlier kidnapped his son, his mother and his brother.Eyewitnesses said army bulldozers leveled the home, its surrounding walls, and caused damage to various nearby homes and structures, before withdrawing from the area.

The demolition of the Palestinian properties is part of a larger invasion in which the soldiers fired missiles into two homes, causing excessive damage and completely burning them, and also demolished walls surrounding several homes.

The Israeli attack also caused a complete power blackout in the camp, Wad Burqin, Kafr Dan village and other nearby areas.

A Palestinian child, identified as Islam Dabaya was injured after being struck by a speeding Israeli military jeep.

Abu al-Haija’s mother was released hours after her abduction by the soldiers.

The Israeli army said the offensive ‘targeted a senior Hamas member,’ and that a joint military force and security agents invaded the camp to ‘abduct the senior Hamas target.’

An army spokesperson said clashes took place between the soldiers and dozens of local youths, who hurled stones and empty bottles on them, and that an officer was injured in the clashes.

The spokesperson retracted previous military claims of armed clashes, and Molotov cocktails, during the invasion, and said it is possible the soldier was shot by friendly fire.

Palestinian medical sources said several residents were injured by Israeli army fire, and several others were kidnapped by the invading soldiers.

Army Kidnaps Former Political Prisoner, His Mother, Son and His Brother in Jenin