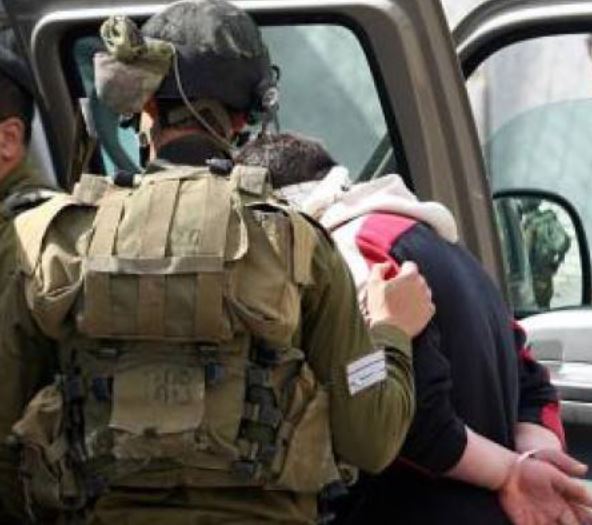 Israeli soldiers kidnapped, earlier on Tuesday, at least nine Palestinians in different districts of the occupied West Bank, during various military invasions, and searches of homes.Media spokesperson of the Popular Committee against the Wall and Settlements in Beit Ummar town, north of the southern West Bank city of Hebron, Mohammad ‘Ayyad ‘Awad, said the soldiers stormed and searched several homes in the town, causing excessive property damage, and kidnapped five young men.

All kidnapped Palestinians are former political prisoners; they were moved to the Etzion military base.

‘Awad added that the soldiers handed Hamza Ahmad Abu Hashem, 16, a military warrant for interrogation in the Gush Etzion military base.

In addition, soldiers installed several roadblocks in a number of neighborhoods in Hebron city, the main entrance of Sa’ir and Halhoul towns, and the northern entrance of Hebron city, before stopping and searching dozens of cars, and investigated the ID cards of the passenger.

Furthermore, soldiers kidnapped Ishaq Abdul-‘Aziz Ashqar, as he was trying to cross the Za’tara military roadblock, south of Nablus.

In Bethlehem, soldiers invaded the ‘Aida refugee camp, north of the city, searched a number of homes, and kidnapped Ahmad Mahmoud Ja’ara, 16 years of age.

Clashes have also been reported, on Tuesday at dawn, between local Palestinian youths and Israeli troops in Dahiat Um ash-Sharayet, in the al-Biereh City, near the central West Bank city of Ramallah, after dozens of soldiers invaded it.

The sources added that sounds of explosions were heard in the building, while clashes also took place between the invading soldiers and local youths.