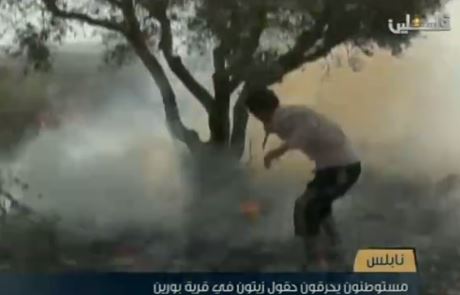 A group of Israeli extremists, living in illegal Israeli colonies in the northern West Bank district of Nablus, burnt on Wednesday at dawn, Palestinian olive orchards and farmlands, belonging to residents of Burin village, south of Nablus.Local sources said the burnt orchards are close to the Yitzhar illegal Israeli colony, built in privately owned Palestinian lands.

Palestinian villagers rushed to their lands to extinguish the fire.

Israeli soldiers arrived on the scene and were seen talking with the fanatics who burnt the orchards, but did not apprehend any of them.

Also on Wednesday morning, soldier imposed a strict siege on the main road between the Huwwara and Za’tara roadblocks, south of Nablus, and surrounded the towns of Beta and Einabous.

The army said it was conducting searches for Palestinians who fired on a settler’s car, and wounded her.

On Tuesday evening,
three Palestinians were injured after Israeli extremists hurled stones on their car, while driving back home in Jenin after paying their respect at the mourning home of the
Dawabsha family in Nablus.

On Tuesday morning, a Palestinian tanager was attacked by a number of Israeli extremists, while heading to his work in West Jerusalem, and suffered various cuts and bruises.