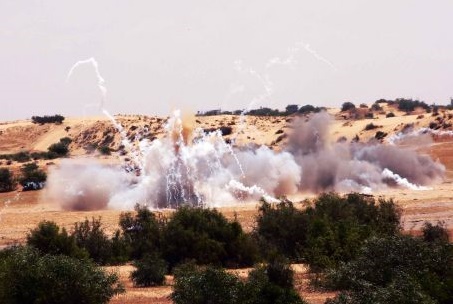 Palestinian medical sources in the Gaza Strip have reported, on Wednesday at dawn, that a young man was hospitalized at the Shifa Medical Center, west of Gaza City, after an Israeli unexploded ordnance detonated near him, causing life-threatening wounds.The sources said the young man suffered wounds to most parts of his body, and is currently at the Intensive Care Room, in a very serious condition.

Dozens of Palestinians have been killed and injured, by Israeli unexploded ordnances, in different parts of the Gaza Strip, especially after Israel’s massive aggression and onslaught on the coastal region in the summer of 2014.

Many unexploded objects are still buried under rubble of bombarded homes and structures in the Gaza Strip.

On Sunday morning, August 16 2015, a Palestinian woman from Rafah city, in the southern Gaza Strip, died from wounds she sustained more than a week earlier, when an unexploded ordnance, from last summer’s military assault on the region by Israel, went off while a family was clearing rubble from a destroyed house in the Shabora neighborhood of Rafah.

Over 7,000 unexploded ordnance were left throughout the Gaza Strip following last summer’s war between Israel and Palestinian resistance groups, according to officials of the UN Humanitarian Coordinator for the Palestinian territories (OCHA).