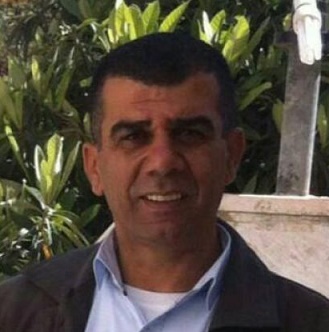 The Israeli Prison Authority renewed, Thursday, the Administrative Detention order against a hunger striking Palestinian detainee, for three additional months, without charges or trial.The Palestinian Prisoners Society (PPS) said detainee Nidal Abu Aker, 46, who is also a journalist and an anchor at the al-Wehda Radio Station, is determined to continue the hunger strike he started on August 20.

The detainee is demanding his release, since his imprisonment is under arbitrary orders without charges.

Abu ‘Aker, from the Deheishe refugee camp in the West Bank city of Bethlehem, is a married father of three children.

The Palestinian Detainees’ Committee said the Israeli Prison Administration is still pressuring six hunger-striking detainees, who started their strike more than 20 days ago, by keeping them held in solitary confinement, and repeatedly transferring them to different prisons, in order to prevent their lawyers from visiting them.

The Committee added it has asked the International Red Cross to intervene, and ensure the detainees are hospitalized and receiving the needed medical attention.

The detainee is suffering from several health issues in his stomach and intestines, in addition to high-cholesterol. He used to take five types of medications, and previously had platinum implant surgeries in his legs.

Abu ‘Aker, and the rest of the hunger striking detainees, are refusing to take any medications or vitamins, and are only drinking water.