PCHR Weekly Report: One dead; 7 wounded, including 4 children, by Israeli troops this week 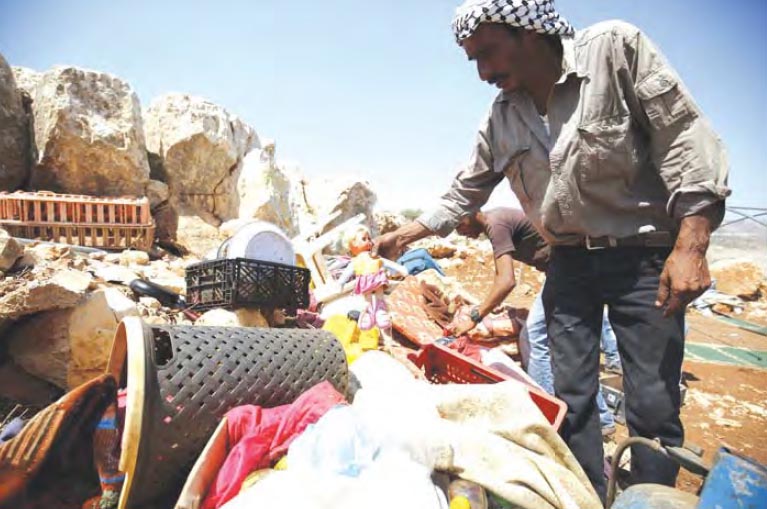 In its Weekly Report On Israeli Human Rights Violations in the Occupied Palestinian Territories for the week of 03 – 09 Sep. 2015, the Palestinian Center for Human Rights (PCHR) found that Israeli forces continued systematic crimes in the occupied Palestinian territories. An arson victim died of her wounds, and 7 Palestinian civilians, 4 of whom are children, were wounded by Israeli forces.Reham Dawabsha succumbed to her wounds, becoming the third victim in her family, following her 18-month old baby and her husband, due to an arson attack by Israeli settlers against the family’s house in Nablus.

Israeli forces continued to use excessive force against peaceful protests in the West Bank. 5 Palestinian civilians, including a photojournalist and 2 children, were wounded.

A girl was wounded in Silwan village, in occupied Jerusalem.

Israeli forces conducted 48 incursions into Palestinian communities in the West Bank and abducted 40 Palestinian civilians, including 4 children and a woman.

15 of these civilians, including 3 children and a woman, were abducted in occupied East Jerusalem.

In one example of the week’s 48 invasions, on September 9th, at approximately 02:30, Israeli forces moved into al-Kom village, west of Dura. They patrolled the streets for some time and then stationed in the center of the village. They deployed between the houses causing fear among families and children. They then raided and searched a house belonging to the family of Naser Mohammed al-Rojoub (25) and abducted him. Meanwhile, Israeli forces raided and searched a house belonging to the family Hasan al-Rojoub (33), al-Aqsa TV Correspondent. They asked his family to bring him from his house, which is next to their house. They questioned him about his work in the channel and his brother who is deported to the Gaza Strip. At approximately 04:00 Israeli forces withdrew and took al-Rojoub to an unknown destination.

During the past week, many checkpoints were established in the West Bank. 2 Palestinian civilians were abducted at checkpoints.

In occupied Jerusalem, on 06 September 2015, an 18-year-old female was hit by a gas canister when clashes erupted between Palestinian youngsters and Israeli forces in the vicinity of Silwan club.

On 06 September, Israeli warplanes launched 2 missiles at a training site belonging to al-Qassam Brigades (the armed wing of Hamas), southwest of Beit Hanoun crossing, north of the Gaza Strip. As a result, the site sustained serious damage, but no casualties were reported.

Also in the Gaza Strip, in the context of targeting Palestinian fishermen, on 03 September 2015, a 10-year-old child from al-Manshiya area in Beit Lahia town sustained a bullet wound to the left thigh when he was in company of his father, who was angling on the shore. Israeli forces stationed in watchtowers along the border fence, northwest of Beit Lahia in the north of the Gaza Strip, opened fire at a group of fishermen angling near the fence.

On the same day in the morning, Israeli gunboats stationed off al-Waha resort, northwest of Beit Lahia village in the north of the Gaza Strip, opened fire sporadically around fishing boats sailing within 3 nautical miles off the shore. As a result, the fishermen were terrified and sailed back to the shore, and neither casualties nor damage were reported.

In a separate incident, Israeli navy forces opened fire at Palestinian fishermen in the Gaza Strip sea. A child was wounded, northwest of Beit Lahia village in the north of the Gaza Strip, while accompanying his father, who is a fisherman.

Israeli forces conducted 4 limited invasions in the northern Gaza Strip. In one example, on 03 September, at approximately 07:30, Israeli forces stationed in Kisovim military site moved 100 meters into the west of the border fence with Israel, east of al-Qararah, northwest of Khan Younis. They levelled lands near the border and then headed to the north along the aforementioned fence to the east of Deir al-Balah in the east of the central Gaza Strip. They levelled until approximately 12:30 when they redeployed along the border fence.

Israel continued to impose a total closure and has isolated the Gaza Strip from the outside world.

A patient from Rafah was abducted by Israeli forces at Beit Hanoun (Erez) crossing, north of the Gaza Strip.

2 Palestinian civilians were abducted at the border fence, north of the Gaza Strip.

3 civilians were wounded as stones were thrown at their vehicle, north of the West Bank.

Israeli forces continued to use excessive and systematic use of force against peaceful protests organized by Palestinian civilians and Israeli and international human rights activists in protest at the construction of the annexation wall and settlement activities in the West Bank and Israeli policies in the Occupied Palestinian Territories. As a result, 5 civilians, including a photojournalist and 2 children, were wounded.

Following the Friday prayer on 04 September 2015, dozens of Palestinian civilians and international and Israeli human rights defenders organized a peaceful demonstration in Bil’in, west of Ramallah, in protest against the annexation wall and settlement activities. The protesters made their way in the streets raising the Palestinian flags and chanting slogans against the occupation. Since the morning, Israeli forces had closed all entrances of the village to prevent Palestinians, international activists, and journalists from joining the demonstration. Upon their arrival in the area, Israeli soldiers fired live ammunition, rubber-coated bullets, sound bombs, and tear gas canisters, chased the demonstrators into the village and sprayed them and civilian houses with waste water. As a result, many of Palestinians suffered tear gas inhalation and others sustained bruises.

On the same day, dozens of Palestinian civilians organized a peaceful demonstration in the center of Ni’lin village, west of Ramallah, in protest against the Annexation Wall and Settlement Activity. The demonstrators took the streets and headed to the annexation wall. Israeli forces prevented the demonstrators from crossing to the land behind the Annexation Wall, so they threw stones at them. Israeli soldiers fired live bullets, rubber-coated metal bullets, sound bombs and tear gas canisters at the civilians, and chased them into the village. As a result, many civilians suffered tear gas inhalation and others sustained bruises as Israeli soldiers beat them up.

Around the same time, dozens of Palestinian civilians and Israeli and international human rights defenders organized a peaceful demonstration in al-Nabi Saleh village, southwest of Ramallah, in protest against the annexation wall and settlement Activity. The demonstrators headed to the lands that the settlers are trying to rob by force near “Halmish” settlement. Israeli forces had closed all the entrances of the village since the morning to prevent them from participating in the demonstration. When they arrived at the aforementioned land, the demonstrators were met by live bullets, tear gas canisters, rubber-coated steel bullets, sound bombs and were chased into the village. As a result, a 48-year-old photojournalist, Bilal Abed al-Salam Tamimi, was injured to the face and the right arm by shrapnel from sound bombs, after the scattering of sound bomb’s shrapnel. Moreover, , many participants suffered tear gas inhalation and others sustained bruises. Additionally, Israeli forces abducted a 32-year-old journalist, who is a reporter with Palestine TV; a 28-year-old activist, Lama Nazeh; a 45-year-old activist, Jameil Bar’othi; a 46-year-old activist, Mohammed Zawahra; and a 44-year-old activist, Mohammed al-Khateeb, and took them towards the iron gate and the military watchtower established at the entrance of the village, after insulting, beating and kicking them with their hands and feet.

On Friday afternoon, 04 September 2015, dozens of youngsters gathered in the southern entrance of Salwad village, northeast of Ramallah, on the road between Selwad and Yabroud, near Street (60) to organize a protest against Israeli policies. The protestors set fire to tires and threw stones at Israeli soldiers who fired live ammunition, rubber-coated metal bullets, sound bombs and tear gas canisters in response. As a result, many civilians suffered tear gas inhalation and others sustained bruises as Israeli soldiers beat them up.

At approximately 01:30 on Friday, 04 September 2015, Palestinian civilians and international solidarity activists organized a protest in the center of Kufor Qaddoum village, northeast of Qalqilya, heading to the eastern entrance of the village in protest against closing that entrance since the beginning of al-Aqsa Intifada with an iron gate. When they arrived at the entrance of the gate, the demonstrators were met by live bullets, tear gas canisters, rubber-coated steel bullets, sound bombs. As a result, 4 civilians, including 2 children were wounded:

In addition, Israeli forces disrupted the electricity transformers all over the eastern neighborhood.

Due to the number and severity of Israeli human rights violations this week, the PCHR made several recommendations to the international community. Among these were a recommendation that the United Nations and the European Union express a clear position towards the annexation wall following the international recognition of the State of Palestine on the 1967 borders, as the annexation wall seizes large parts of the State of Palestine;

In addition, the PCHR calls upon the European Union to activate Article 2 of the EU-Israel Association Agreement, which provides that both sides must respect human rights as a precondition for economic cooperation between the EU states and Israel, and the EU must not ignore Israeli violations and crimes against Palestinian civilians;