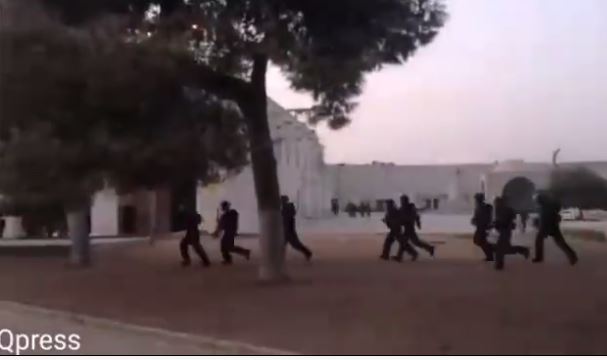 Dozens of Israeli soldiers and police officers invaded, earlier on Sunday, the courtyards of the Al-Aqsa Mosque, in occupied Jerusalem, and fired dozens of concussion grenades on local worshipers, and attacked dozens.Eyewitnesses said the soldiers, including undercover officers, surrounded local Muslim worshipers in the Al-Qibli Mosque, and fired dozens of concussion grenades, before storming it and assaulting several Palestinians, wounding at least two.

The Police also detained two mosque guards near the Chain Gate, one of the gates of the Al-Aqsa Mosque, and surrounded scores of worshipers in the mosque.

The army and police prevented all men, below the age of fifty, from entering the mosque courtyards, as they were heading there for dawn prayers.

The incident caused tension that eventually escalated after the army invaded the mosque.

The soldiers also forcibly removed, and assaulted, dozens of worshipers during the invasion, while extremist Israeli groups continued their provocative tours in the mosque’s courtyards.