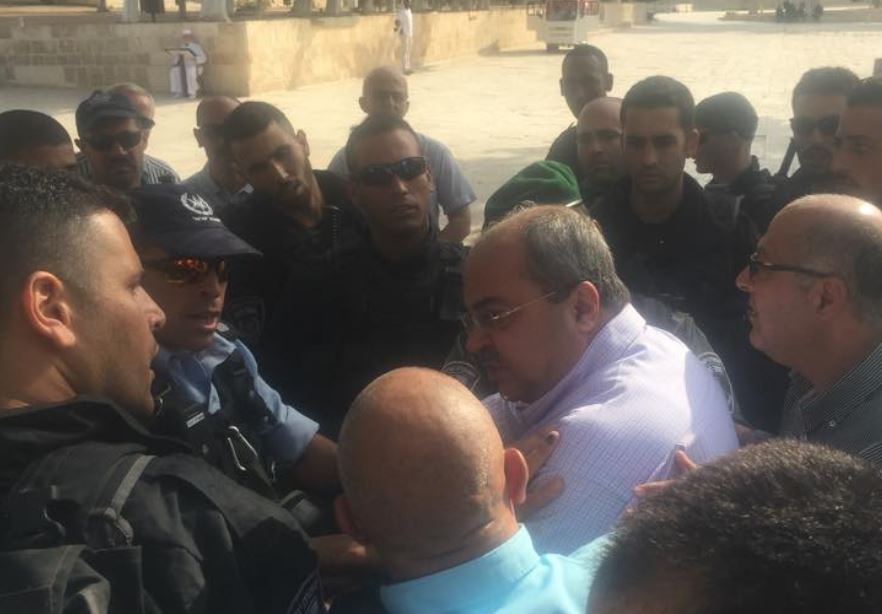 The Palestinian TV said the army used excessive force against the Palestinian Muslim worshipers, fired gas bombs and concussion grenades on them, and occupied the rooftop of the Al-Qibli Mosque of Al-Aqsa.

The soldiers also chased dozens of residents in the mosque, and engaged in fistfights with many young Palestinians.

The Palestinian Waqf and Islamic Endowment Department said the soldiers imposed a strict siege on the Al-Aqsa Mosque and the Old City, since late night hours, and installed iron barriers to prevent the Palestinians from entering.

The Palestinian TV said dozens of Palestinians were also injured, not only in the Al-Aqsa Mosque, but also in various Palestinian neighborhoods in the occupied Old City, after the soldiers used excessive force against them, while allowing Israeli fanatics to continue their provocative tours and invasions into the Al-Aqsa courtyards.

Many wounded Palestinians received first aid by the medics of the local clinic in the Al-Aqsa Mosque, as the army prevented Palestinian medics and ambulances even from approaching it.

Arab Member of Knesset, Dr. Ahmad Tibi, who was in the mosque compound during the attack, said Israel is implementing its recent decision to divide the Al-Aqsa Mosque.

He added this division is done physically, and by allotting certain hours every day only specified for Jewish settlers , after removing all Palestinian worshipers from the entire area.

Dr. Tibi also stated that he and many other Arab members of Knesset, social and religious figures, personally witnessed how the Palestinians were completely removed from the mosque and its courtyards, before the police started allowing dozens of Israeli fanatics into it.

The official said the Palestinians would continue to protest and reject all Israeli assaults against the mosque, and will continue their protests to defend the holy sites in Palestine.

All Palestinian worshipers have been forcibly removed from the mosque and its surrounding areas, amidst escalating provocative tours and attacks by Israeli fanatics and officials, causing more tension and clashes.

In addition, Dr. Tibi said the Palestinians reject the Israeli decision to divide of the Al-Aqsa Mosque, and will continue to resist it.

The official stated the decision came as a result of years of planning by consecutive Israeli government, the same way they divided the Ibrahimi mosque in Hebron.

He added that the current right-wing Israeli government of Benjamin Netanyahu has one of the most fanatic and extremist elements, and wants to prove to all right-wing parties it was successful in dividing the mosque.