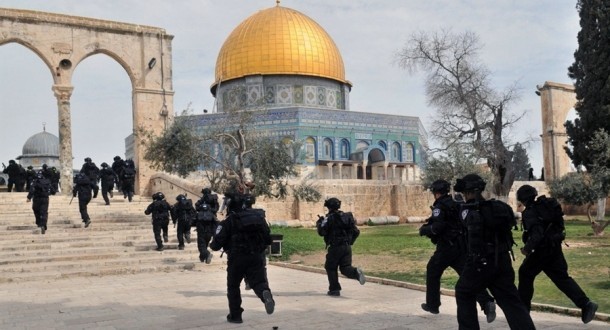 Israeli police, on Wednesday, assaulted two Islamic Waqf guards and a number of women, with their clubs, at al-Aqsa Mosque compound in Jerusalem, according to local sources.Omar Keswani, director of al-Aqsa Mosque, said the police assaulted the guards and women while they were attempting to confront Jewish fanatics who broke into the Mosque to perform rituals there.

The guards were transferred to hospital for medical treatment, according to WAFA.

According to Israeli media, Netanyahu stressed during a Wednesday meeting, in his office, that Israel is committed to maintaining the status quo at al-Aqsa Mosque, but he will not allow what he described as “rioters” to prevent Jews from visiting the site.

This came after a three-day round of violent clashes which took place at the Islamic site, prompted by calls from Jewish fanatics to organize large-scale Jewish visits there to mark to beginning of the Jewish new year Rosh Hashanah.

On Tuesday, Israeli police attempted to storm al-Qibili Mosque in the compound and damaged its historical doors in order to detain Palestinian worshippers barricading themselves inside.

Israel has been enforcing a unilateral temporal division on the mosque during the past few weeks, a measure that was widely condemned and rejected, particularly by Jordan, which is responsible for Jerusalem’s holy sites in line with a 1994 peace treaty with Israel. The Israeli ongoing attacks on the mosque were also denounced by the US, UN, and EU.