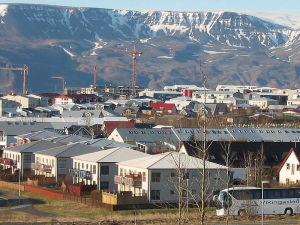 Iceland’s capital Reykjavik has passed a resolution that banns all Israeli-made products. The resolution was adopted over Israel’s protracted and illegal occupation of Palestinian territories.Reykjavik’s ban comes as the international Boycott Divestment Sanctions (BDS) campaign against Israel continues to gain momentum.

Both proponents and those in opposition, including Israel, consider the resolution passed by the City Council of Iceland’s capital Reykjavik as a major achievement of the international Boycott Divestment Sanctions (BDS) campaign.

Reykjavik’s municipality has previously lobbied for the de-facto and legal establishment and recognition of an independent, sovereign and functioning Palestinian State and for an end to Israel’s protracted and illegal occupation of Palestinian territories.

Members of Reykjavik’s City Council noted that the resolution was a measure that has both practical and symbolic functions, aimed at ending what is described as Israel’s policy of apartheid and racism.

“I believe that the city is sending a clear message that it will not purchase products from Israel while Israel oppresses another people on the basis of ethnicity and race, and continues having the wall inside Palestine”.

Councilwoman Björk Vilhelmsdóttir added that she intended to spend the remainder of 2015 doing humanitarian work in the occupied Palestinian territories.

The resolution does not mention any specific products or companies and can thus be interpreted as a broad and complete ban on all Israeli-made products.

The resolution was denounced by Reykjavik’s Independence Party. The party’s leader, Halldór Halldórsson, argued that:

“Free trade is the best way to ensure peace. We should build bridges between people, and business is one of the best connections that exist.”

The resolution was heavily criticized by the Israeli Ministry of Foreign Affairs (MoFA). The Ministry referred to Iceland’s volcanic activity and compared Reykjavik’s City Council with a “volcano of hatred”. The Israeli MoFA issued an official statement, saying:

“For no reason or justification, except hatred for its own sake, calls of boycotting the state of Israel are heard. … We hope someone in Iceland will come to their senses and end the one-sided blindness fielded against Israel, the only democracy in the Middle East.”

The international BDS campaign has made major progress in 2015. Only two weeks ago one of Luxembourg’s largest grocery chain, Cactus, banned Israeli products from their stores.