Including A Child, Army Kidnaps Six Palestinians In Hebron 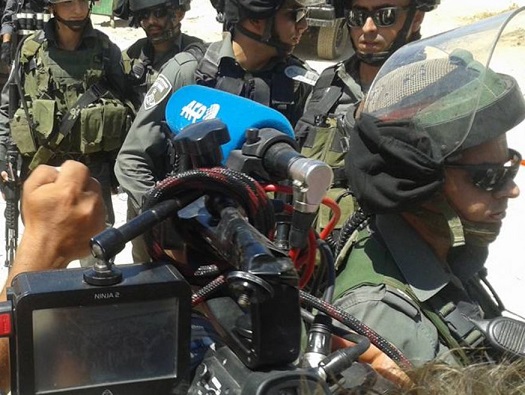 Media sources have reported, Thursday, that Israeli soldiers kidnapped six Palestinians, including one child, in different parts of the southern West Bank district of Hebron.The sources said the army invaded Tal’at Abu Hadid area, in the southern area of Hebron, and kidnapped Elias Hazem al-Ja’bari, 26, after attacking him and spraying his face with pepper-spray.

Soldiers confiscated cameras from a local reporter, identified as Abdul-Hafith al-Hashlamoun, after searching his home in the town.

Coordinator of the Popular Committee against the Wall and Settlements in Beit Ummar town, Mohammad Ayyad Awad, has reported that the soldiers kidnapped Mohammad Falah Abu Mariya, 25, his brother Yahia, 20, and handed their brother, Haidar, 20, a military order for interrogation.

He was shot dead by the army, in his own home, as he tried to help his son, Mohammad, who was shot by the soldiers in the pelvis, after they stormed their home.

In addition, soldiers kidnapped Raed Omar Sleibi, 19, and assaulted his brother before spraying his face with pepper-spray; he was moved to a local clinic.

The soldiers also kidnapped a child, identified as Mohannad Mohammad Abu Mariya, 15, after breaking into his family’s home.

All kidnapped Palestinians were moved to the Etzion military base for interrogation.

It is worth mentioning that the army have kidnapped 19 Palestinians from Beit Ummar, since the beginning of this month.

Also on Thursday at dawn, soldiers eight Palestinian children after storming their homes in different parts of the Old City of occupied East Jerusalem, and several surrounding communities.