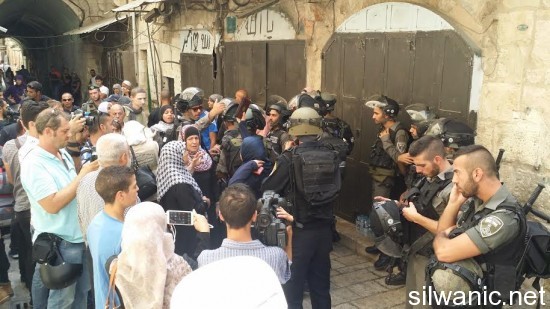 Israeli soldiers kidnapped, on Thursday at dawn, eight Palestinian children after storming their homes in different parts of the Old City of occupied East Jerusalem, and several surrounding communities. Sixty Palestinians, including 26 children, have been kidnapped since last Sunday.Media sources in Jerusalem said the soldiers have kidnapped Nabil Nidal Seder, 13 years of age, while trying to cross the an-Nather Gate of the Al-Aqsa Mosque.

The soldiers also invaded the al-‘Isawiyya town, in the center of Jerusalem, searched several homes, and kidnapped a child identified as Majd Darweesh.

It is worth mentioning that the Israeli government has recently approved harsh measures against Palestinians, accused of attacking soldiers and illegal settlers, including long prison terms, and fines that reach 100.000 Shekels.

Silwanic added that the army has kidnapped more than 60 Palestinians, including 26 children (seven of them under 12 years of age) in the short period between Sunday, September 13, and Thursday morning, September 17.

It also said that most of the abductions took place during clashes, and home invasions, in various neighborhoods of the Old City, in addition to Silwan, al-‘Isawiyya, at-Tour, Wadi al-Jouz, Sur Baher and the Shu’fat refugee camp.