Jaffa Demonstrates in Protest of Israeli Violations against Al-Aqsa 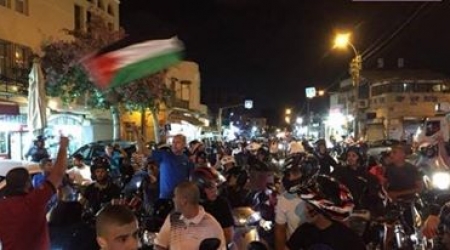 Hundreds of Palestinians in pre-1948 occupied territories participated on their motorcycles, Wednesday, in a mass demonstration launched from Al-Ajami garden, and roamed a number of streets in the city.According to Al Ray, the angry participants chanted slogans denounced the recent desecrations of Al-Aqsa Mosque at the hands of Israeli settlers, and the multitude of Israeli police on their guard.

The participants waved Palestinian flags and chanted, calling to stop the Israeli invasions into the Al Aqsa Mosque and the violations against worshippers, there.

The march was organized with motorcyclists gathering from Jaffa to the Al-Aqsa, to stand in solidarity with the people of Jerusalem and the mosque.

To be noted, the motorcyclists organized two marches to Al-Aqsa Mosque over the past months, launched from the city of Jaffa, with the participation of hundreds of young people and other motorcycle enthusiasts.

Umm al-Fahm, in the southern triangle, witnessed a march where hundreds of people joined the city in solidarity with Al-Aqsa, and to condemn the Israeli aggression against it.

Participants chanted slogans, during the march, that the Popular Committee called for, in denuciation of the desecration of the sanctity of the holy site, and stressing that all the people in the pre-1948 occupied territories would not allow the division of Al-Aqsa in time and space.

In the same context, the Islamic movement in the village of Arrab organized, on Wednesday evening, a stand in solidarity with the mosque, and against the violations committed by Israeli occupation forces in Jerusalem, against the worshipers at Al-Aqsa.

Dozens of men, women and children gathered on the main square of the village, raised slogans condemning the occupation and its crimes against Al-Aqsa, and against the temporal and spatial partitioning policy of the mosque.

The participants called on all the Arab and Muslim decision-makers to take action before Israeli authorities impose full control on Al-Aqsa.