The Intifada of Jerusalem? 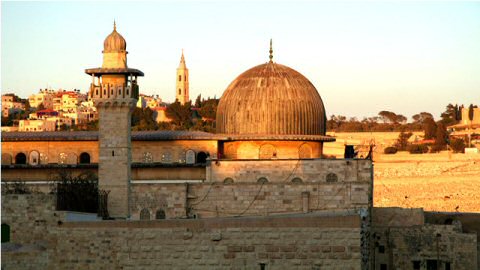 Life is becoming untenable for Palestinians in Jerusalem.The strategy of Teddy Kollek, the infamous mayor of Jerusalem following Israel’s 1967 occupation and subsequent annexation of Jerusalem, was grounded on three principles: separation between the communities in order to reduce friction to a minimum; colonisation on the city’s outskirts, in order to create a human wall between the West Bank and Israel; and maintenance of the character of the al Aqsa mosque compound and its management by Jordan.

This strategy proved itself: there were 250,000 new settlers in a real urban belt around occupied East Jerusalem and an international (and widely misused) image was cultivated – Jerusalem as a city of coexistence between Israelis and Palestinians. While the privileges enjoyed by Palestinians in Jerusalem (residency cards allowing them to travel and work on Israeli territory, as well as access Israeli social security) explain the relative calm in the city in recent decades. When revolts did take place, they remained in response to a provocation by Israeli authorities, whether intentional or not, including against the tunnel under al Aqsa, Prime Minister Sharon’s 2000 visit to the al Aqsa compound or “prayers” organised by small groups of the extreme right in the area.

The extreme right coming to power changes this game: colonisation is now in the heart of Palestinian neighbourhoods (including Silwan, Sheikh Jarrah and the Muslim Quarter of the Old City), Israel systematically destroys homes built without the nearly impossible to obtain prior permission, administrative decrees are issued that push the Palestinian population out of its city (impossibility of family reunification and acquisition of Jerusalem residency). To this we must add the increasingly violent police behaviour against Palestinians, especially young people, and daily attacks by settlers, including even murder (one year ago, the young Mohammad Abu Khdeir was burnt alive by three Israelis).

In other words: life becomes untenable for many Palestinian residents of the city, and tension continues to grow.

This risk of eruption now centres on Israel’s intransigence around the al Aqsa mosque esplanade. The Israeli ‘visits-prayers’ to this area include not only small groups of extreme right-wing settlers, but also Knesset members and even ministers. Police preemptively repressed rallies of young Muslims who were on the esplanade to protect al Aqsa; two Muslim organisations were just now deemed illegal, and the police have repeatedly closed the al Aqsa mosque, not hesitating to bring weapons into this third holiest site in Islam.

This explains why tension tension is rising rapidly in East Jerusalem neighbourhoods, and stone throwing against Jews has become a daily occurrence in the neighbourhoods of the Arab city and its environs.

Rather than addressing the provocating factors, the government adds to this and has chosen to increase repression: increased police, mass arrests of teenagers and even children, substantial jail sentences for throwing stones (which will be considered as ‘attempted murder’ [sic]). Such measures will obviously increase tension and confrontation.

This is what explains the unusually firm cautionary warning of Jordan’s King Abdullah II; he recalled the importance of Jerusalem and its mosques to more than one billion Muslims around the world, and called on the Israeli government to immediately put an end to provocations. Otherwise, the Jewish state was taking the risk of a mass uprising in the region and even beyond. It is doubtful that Netanyahu, Ya’alon and Bennett hear the message of their faithful allies.